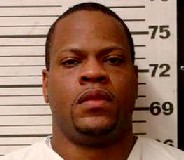 My reader-researcher David in Tennessee wrote me just before midnight last night with the news:

"I attended the sentencing hearing today. WATE has the best account. See the two videos.

Davidson looked well-fed, not ”Slim” any longer. Has grown back the goatee he shaved off for the trial. The families’ victim impact statements were great. Davidson looked stoic, then defiant.

Judge Baumgartner at one point said, ”I can’t understand this” over and over. I’m not sure if he said it directly, but the judge seemed to endorse the death sentence, apart from giving it as he was required by law."

”LeMaricus Davidson, one of four convicted in the Christian-Newsom murders case, was sentenced Friday to back-to-back death penalties.

Davidson was already serving time on death row for the four capital convictions he received in the case in October 2009.

As he prepared to announce his decision, Judge Baumgartner said this is one of the most ”incredibly outrageous, cruel, inhumane cases that this court has ever seen.” He also called it one of the most ”horrendous” crimes in Knox County that he knows of.

The judge also said it’s clear to him that Davidson was the ringleader in the crimes and how anyone can engage in that kind of conduct is ”unexplainable.”

Judge Baumgartner said the Tennessee foster family who testified at Davidson’s sentencing hearing hoping to save him from the death penalty instead showed the judge that Davidson had a chance to change his life, but he didn’t.

”I’m sorry, but I have no mercy,” the judge told Davidson and his defense team.

The jury found Davidson guilty of the lesser charge of facilitating Newsom’s rapes, rather than raping Newsom himself. Davidson was found guilty of raping Christian.

Judge Baumgartner sentenced Davidson to 80 years for those lesser convictions.

Davidson was convicted of aggravated robbery and carjacking when he was a teen and served time in prison. He was also charged with home invasion and thefts….

Deena Christian, the mother of murder victim Channon Christian, asked in a victim’s impact statement she read from the witness stand if Davidson ”bothered” to learn Channon’s name before he kidnapped, raped and tortured her.

She called Davidson an animal who has no remorse for what he did….

Gary Christian, Channon’s father, said in his statement that he dreams of his daughter and smells her hair and hears her voice. He said in the dreams, she has his grandchild.

”I can see her smile and then it fades away.”

Gary said he wakes up and hates even more.

In his dreams, Gary said he and his son, Chase, find Davidson and give him a little ”East Texas justice,” not this.”

Gary says every day he has nightmares, except he’s awake. Glaring at Davidson from the stand, Gary said he could see his daughter being tortured over and over again and he can’t stop it….

”I will do everything in my power to have that needle stuck in you as soon as possible,” Gary told Davidson.

The statements by the Christians are different from any they’ve given in previous sentencing hearings in this case….

Mary Newsom, the mother of Chris Newsom, said in her statement that Davidson deserves nothing less than the death penalty.

”How can a normal person” do these things, Mary asked Davidson. ”I’m sorry. I guess you’re not normal.”

Hugh Newsom, Chris’ father, said when he saw the autopsy photos and imagined what Chris went through in his last hours, it sent ”indescribable rage” through him.

He pointed out that although Davidson was raised in the Memphis housing projects so was Elvis Presley.

Davidson’s sisters made successful lives for themselves, Hugh pointed out. ”What happened to you,” he asked….

Davidson declined to make any comments on his own behalf when the victims’ impact statements were finished….

During the hearing, Davidson showed no emotion but he also didn’t look away when the victims’ families cast emotional daggers at him….

”He showed no remorse and no feelings,” Hugh said.

However, the victims’ parents expressed their satisfaction with the sentencing. ”He got what he deserved. I am just proud of the judge. He did the right thing,” Deena said….

The parents were happy with Judge Baumgartner’s ruling, but said they were disappointed in the justice system.

Hugh Newsom said the couple could still be alive if Davidson wasn’t let out on the streets before the murders.”

Amen to that, Mr. Newsom!

For background on this case, see my VDARE.com report, The Knoxville Horror: Crime, Race, the Media, and ”Anti-Racism,” and specifically on Davidson, One Knoxville Horror Perp Sentenced to Death–But the Time-Bomb is Ticking.

For a more complete picture, read my other VDARE.com articles on the Knoxville Horror here and here.