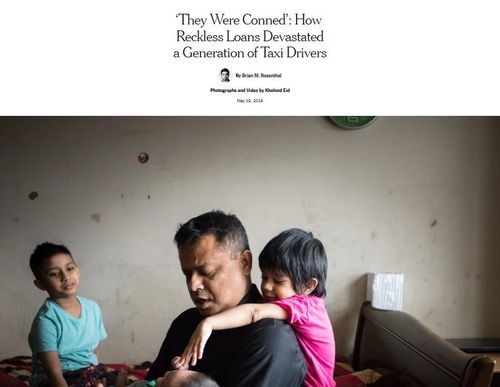 Immigrants As Fresh Meat For Lenders

‘They Were Conned’: How Reckless Loans Devastated a Generation of Taxi Drivers

“They were conned”: Thousands of immigrant taxi drivers were trapped in exploitative loans by bankers who made huge profits.

The drivers, chasing the dream of owning a New York taxi medallion, were left destitute, a Times investigation found.

The phone call that ruined Mohammed Hoque’s life came in April 2014 as he began another long day driving a New York City taxi, a job he had held since emigrating from Bangladesh nine years earlier.

The call came from a prominent businessman who was selling a medallion, the coveted city permit that allows a driver to own a yellow cab instead of working for someone else. If Mr. Hoque gave him $50,000 that day, he promised to arrange a loan for the purchase.

After years chafing under bosses he hated, Mr. Hoque thought his dreams of wealth and independence were coming true. He emptied his bank account, borrowed from friends and hurried to the man’s office in Astoria, Queens. Mr. Hoque handed over a check and received a stack of papers. He signed his name and left, eager to tell his wife.

Mr. Hoque made about $30,000 that year. He had no idea, he said later, that he had just signed a contract that required him to pay $1.7 million.

Over the past year, a spate of suicides by taxi drivers in New York City has highlighted in brutal terms the overwhelming debt and financial plight of medallion owners. All along, officials have blamed the crisis on competition from ride-hailing companies such as Uber and Lyft.

But a New York Times investigation found much of the devastation can be traced to a handful of powerful industry leaders who steadily and artificially drove up the price of taxi medallions, creating a bubble that eventually burst. Over more than a decade, they channeled thousands of drivers into reckless loans and extracted hundreds of millions of dollars before the market collapsed.

But the methods stripped immigrant families of their life savings, crushed drivers under debt they could not repay and engulfed an industry that has long defined New York. More than 950 medallion owners have filed for bankruptcy, according to a Times analysis of court records. Thousands more are barely hanging on.

The practices were strikingly similar to those behind the housing market crash that led to the 2008 global economic meltdown: Banks and loosely regulated private lenders wrote risky loans and encouraged frequent refinancing; drivers took on debt they could not afford, under terms they often did not understand.

It’s almost as if the reason we are constantly lectured by the Great and the Good that America Is a Nation of Immigrants and that sensible immigration restrictions would make the Statue of Liberty cry is because there is big money in importing Fresh Meat.