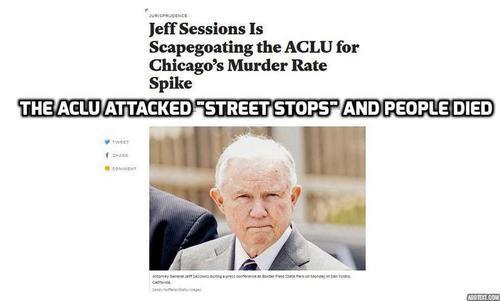 Earlier: Murders Up 84% in Chicago; in Unrelated News, ACLU, White House Cracking Down on Chicago PD for Racism, March 28, 2016

In 2016, the number of homicides in Chicago jumped by 58 percent year over year. Why? Most social scientists have struggled to reach any firm conclusions. But in a speech on Tuesday in Gatlinburg, Tennessee, U.S. Attorney General Jeff Sessions claimed he’s found the smoking gun in a study by former federal judge Paul Cassell and economist Richard Fowles: It’s called the “ACLU effect.” Liberal police reform, this theory insinuates, is deadly business. Is Sessions right? Should we really be scared of the ACLU? No. The “ACLU effect” is a mirage.

Cassell and Fowles attribute the homicide spike to a drop in stop-and-frisk activity by the Chicago Police Department, which they tie, in turn, to a deal between Chicago and the ACLU requiring officers to document street stops more thoroughly. The agreement aimed to create a reservoir of evidence for determining whether stops are unjustified or discriminatory. The theory behind “the ACLU effect,” then, is that requiring officers to collect all this data slowed them down nearly to a halt. “If you want crime to go up,” Sessions scoffed, “let the ACLU run the police department.”

CPD’s street-stop activity did plummet by about 75 percent in late 2015—from around 40,000 stops per month to 10,000—as homicides and other gun crimes broke sharply upward. But that doesn’t mean the decline in street stops caused the homicide spike. For one thing, other crimes in Chicago didn’t jump nearly as much when stops slowed down. So Cassell and Fowles need some theory for why street stops, when conducted en masse, were depressing gun violence but not other crimes—such that, when stop and frisk dropped, gun crimes alone shot up. They don’t have one. In fact, other research suggests that when proactive policing slows down, we might, if anything, expect a greater increase in property crime than violent crime.

I have a theory: Stop and Frisk is an effective way to enforce Chicago’s stringent gun control laws. Reducing Stop and Frisk by 75% made gun control into something of a dead letter on the streets of Chicago, causing a near immediate spike in murders committed with guns.

Stop and Frisk is, to a large extent, about gun control: the cops pull over somebody they deem suspicious looking, pat him down, find him carrying a gun illegally, and send him to prison. Pretty quickly, suspicious-looking individuals carry fewer guns.

Conversely, when The Establishment (e.g., the ACLU, the Obama Administration, the national media) come down on a local police force, as happened to the Chicago Police Department in late November 2015 after it had to release the video of an apparently inexcusable shooting, the opposite of what happened in New York City happens. Dodgy characters start carrying guns on the street more and they use them more.

That can explain what’s baffling Slate: when the Chicago Police Department stopped so aggressively enforcing gun control in late 2015, why did murders shoot up much faster in early 2016 than less severe crimes? Because, just like gun control advocates say, guns are more lethal. So the safer it was for a criminal to pack heat, the more people died.

But that doesn’t mean lesser crimes would shoot up the same. In fact there might be, if anything, a negative correlation between, say, barroom brawling, theft, and the like versus guns on the street. Britain, for example, has few murders but an awful lot of mid-level crime, in part because it’s safer to be a criminal predator in Britain because you aren’t that likely to get shot.

But who when writing a long article for Slate can imagine something so complicated and ironic and problematic as the idea that gun control and stop and-frisk-are related. They’re both not very Constitutional and not very effective without each other, but pretty effective together.

Instead, everybody is supposed to know that gun control is Good and stop-and-frisk is Bad and that’s all you need to know.