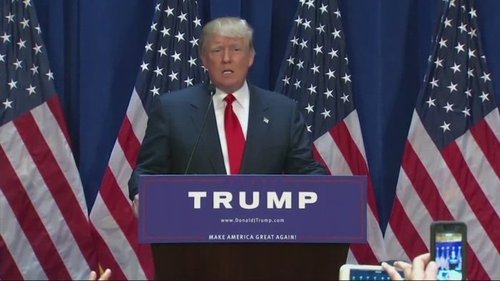 How Long Before Trump Meetings Are Compared To Nuremberg Rallies?

A startling thing has happened to Donald Trump’s rally in Mobile Alabama, scheduled for Friday evening.

City officials have confirmed to News 5 the location for Donald Trump’s pep rally in Mobile on Friday night has been moved to Ladd-Peebles Stadium...

“It’s due to an overwhelming response,” said Kayla Farnon, spokeswoman for the Alabama Secretary of State’s Office. “More than 30,000 people have been confirmed to attend.”

…As we had previously reported, Trump’s town hall rally in Mobile was originally planned to be held in the theater at the Mobile Civic Center, which seats less than two-thousand people.

“I don’t see how he’s electable. Bush is a low-energy person,” he said. “It’s hard for him to get things done.”

…“The reason I talk about Jeb is because he was supposed to do well in New Hampshire, but he’s going down like a rock,” Trump said during his town-hall to cheers from a crowd that was more rowdy and generous with applause for the host — and with boos for his rivals — than those at most political events.

The state trooper in charge of the event told the governor that in all his years working the fair, he had never seen a candidate mobbed like Trump.

Peter Brimelow predicted in The Trump Wrecking Ball, The Washington Cartel, And The Jews that notwithstanding Trump’s careful conventionality on Israel, the fanatical open-borders ideology pervading the bulk of this powerful community will eventually cause them to become as hostile to him as they were to Pat Buchanan.

I think we may not have to wait so long. A couple more events like Mobile looks like being and we are going to be deluged with Nuremberg rally comparisons. No one who can stir up the Serfs like this is going to be trusted.