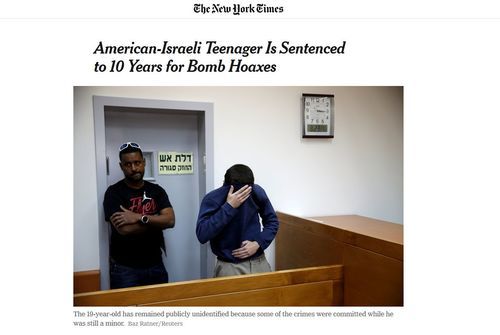 The New York Times runs a sizable article on the sentencing of the Israeli-American Jewish man who phoned in all those bomb threats to Jewish institutions in the U.S. and yet, incredibly, never mentions his name nor that he is Jewish.

American-Israeli Teenager Is Sentenced to 10 Years for Bomb Hoaxes

The 19-year-old has remained publicly unidentified because some of the crimes were committed while he was still a minor.

That makes perfect sense. It’s like banning any mention of serial killer Ted Bundy’s name because he had also tortured animals when he was a minor.

Outside of the New York Times, the criminal’s name is Michael Ron David Kadar. You can look it up on Wikipedia.

This is kind of like how Haven Monahan’s name has only appeared once in the history of the New York Times and Jackie Coakley’s last name never. It’s a way of memory-holing embarrassing events by keeping them vague. If nobody has a handle to remember them by, the can’t be part of The Narrative. It’s rather like how there is no journalistic shorthand name for Merkel’s Mistake letting in the Million Marching Muslim Men in 2015.

The Wikipedia article, on the other hand, is pretty good:

In early 2017, a wave of more than 2,000 bomb threats were made against Jewish Community Centers in the United States, United Kingdom, Australia, New Zealand, Norway and Denmark.[1] Two arrests were made in connection with the threats and Michael Ron David Kadar, a dual American-Israeli citizen, has been convicted.[2][3] He was sentenced to 10 years imprisonment.

Theories
Media speculation made by the ADL in January 2017 promoted the view that the threats were the responsibility of “right wing Christians in the United States”.[4] The same month, Jerry Silverman of the Jewish Federations of North America said the threats were part of a “coordinated effort” to intimidate American Jews.[5] In February, during an interview on CNN, U.S. Congressman Jerrold Nadler said that some supporters of Donald Trump were responsible for the threats.[6]

In an op-ed for the Baltimore Sun, deputy editor Tricia Bishop said the threats represent a growing attitude of racial intolerance in the United States, but probably no specific group or person was responsible for the threats. She implored readers to “stand up … before it’s your children they come for”.[7]

Suspects
In March 2017, two persons were arrested on separate charges of making a number of the bomb threats:

American journalist
Juan M. Thompson, a former journalist for The Intercept, was charged with responsibility for at least eight of the incidents.[8] According to media reports, Thompson had called in the threats in an attempt to frame a woman whom he had previously dated.[9] …

They should also mention that Thompson was left of center and black, but that at least is a good start.

A 19-year-old Jewish Israeli-American named as Michael Ron David Kadar, was arrested in March 2017 in Ashkelon, Israel and charged with responsibility for “dozens” of the threats.