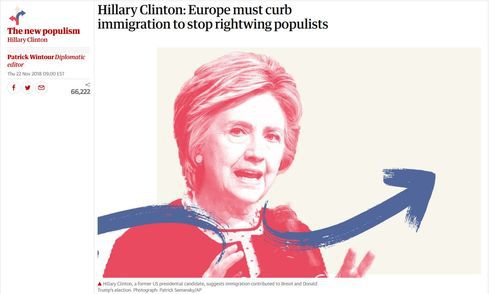 Clinton, Blair, Renzi: why we lost, and how to fight back
Patrick Wintour Diplomatic editor Thu 22 Nov 2018 0

Europe must get a handle on immigration to combat a growing threat from rightwing populists, Hillary Clinton has said, calling on the continent’s leaders to send out a stronger signal showing they are “not going to be able to continue to provide refuge and support”.

It’s almost as if the moderate, sensible approach to immigration policy is that of right wing extremists and the extreme approach is that of moderates. But how could that be? After all haven’t we each read a million times that prudent protection of the borders is extremist? And that moderates have hazy views on whether borders are legitimate at all, but seem to oppose any particular attempt to protect borders?

In an interview with the Guardian, the former Democratic presidential candidate praised the generosity shown by the German chancellor, Angela Merkel, but suggested immigration was inflaming voters and contributed to the election of Donald Trump and Britain’s vote to leave the EU.

“I think Europe needs to get a handle on migration because that is what lit the flame,” Clinton said, speaking as part of a series of interviews with senior centrist political figures about the rise of populists, particularly on the right, in Europe and the Americas.

“I admire the very generous and compassionate approaches that were taken particularly by leaders like Angela Merkel, but I think it is fair to say Europe has done its part, and must send a very clear message – ‘we are not going to be able to continue provide refuge and support’ – because if we don’t deal with the migration issue it will continue to roil the body politic.”

Clinton’s remarks are likely to prove controversial across Europe, which has struggled to form a unified position ever since more than 1 million migrants and refugees arrived in the EU in 2015.

While some countries who have borne the brunt, such as Germany, Italy and Greece, have argued for the burden to be shared more evenly, some, particularly in central and eastern Europe, have rejected demands to take in refugees. …

Because that’s really the big point about that unnamed event of 2015: not Chancellor Merkel unilaterally and whimsically suspending an EU regulation that is central to Europe’s future, but Poland and Hungary not going along with a plan made up to paper over Merkel’s Mistake and implicate everybody else in it too.

Clinton was one of three heavyweights of the centre-left interviewed by the Guardian to better understand why their brand of politics appears to be failing. All three have seen their countries upended by political events that to some degree can be explained by the success of rightwing populism.

The other two interviewees, Tony Blair and Matteo Renzi, agreed that the migration issue had posed significant problems for centrist politics.

“You’ve got to deal with the legitimate grievances and answer them, which is why today in Europe you cannot possibly stand for election unless you’ve got a strong position on immigration because people are worried about it,” Blair said. “You’ve got to answer those problems. If you don’t answer them then … you leave a large space into which the populists can march.”