Statement from The Intercept:

STATEMENT ON THE ARREST OF FORMER INTERCEPT REPORTER JUAN THOMPSON

We were horrified to learn this morning that Juan Thompson, a former employee of The Intercept, has been arrested in connection with bomb threats against the ADL and multiple Jewish Community Centers in addition to cyberstalking. These actions are heinous and should be fully investigated and prosecuted. We have no information about the charges against Thompson other than what is included in the criminal complaint. Thompson worked for The Intercept from November 2014 to January 2016, when he was fired after we discovered that he had fabricated sources and quotes in his articles. 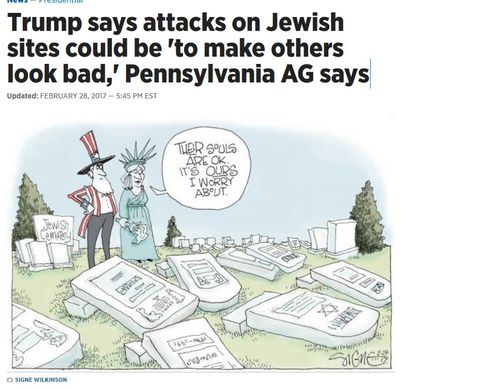 Trump, of course, was denounced for mentioning the possibility that some of these events could be hate hoaxes.

The phenomenon of Trump’s Luck is that Trump better understands the odds than the MSM, who can’t imagine Hate Hoaxes, because that’s not a respectable category to have in your head.