When the Monsey stabber, who is black, was reported to have the normal name Grafton Thomas, people suspected he might be a West Indian immigrant. Close! Apparently he's the citizen child of Guyanese immigrants, as Ken Cuccinelli Tweeted and then deleted. Guyana, formerly British Guiana, isn't in the West Indies, it's on the northern mainland of South America, near Venezuela, but it's much the same, culturally, as places like Trinidad.

Here's the Daily Mail reporting on it:

Acting Deputy Homeland Security Secretary Ken Cuccinelli tweeted Monday that the Hanukkah party stabber was the son of an illegal immigrant
Cuccinelli suggested that 37-year-old Grafton Thomas, who is accused of stabbing attendees of a Hanukkah party in New York, didn't assimilate properly
'Apparently, American values did not take hold among this entire family, at least this one violent, and apparently bigoted, son,' Cuccinelli wrote
The tweet was later deleted and the Department of Homeland Security did not immediately comment on its contents
A lawyer for Thomas said that the suspected stabber's parents immigrated from Guyana in South Africa, but did address their one-time immigration status 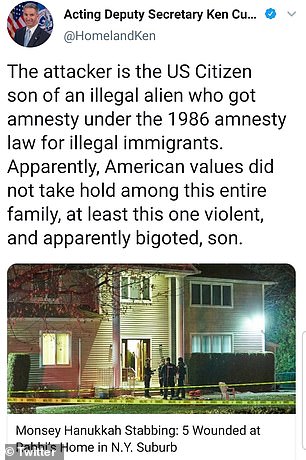 Grafton Thomas has a lawyer, who when asked about this, was uninformative, and tried to deflect from the issue. (Fair enough, it's his job.)

Grafton Thomas, 37, the accused stabber, is the son of immigrants from Guyana, his attorney Michael Sussman told DailyMail.com. His mother became a naturalized citizen in 1986, while his father now lives in Utah and the pair are not close.

The accused man's attorney did not address whether his father had previously been in the U.S.illegally.

'I think this use of immigration, we won't get into a broader conversation of it here today, but it's more than regrettable that the events of 30-plus years ago are in any way linked to this,' said Thomas' lawyer Sussman.

Sussman said his client and his father 'had some, but not an extensive relationship.' Of his mother Kim Thomas, Sussman said: 'In 1986, she gained citizenship in the United States and she has been a law-abiding and contributing member of our community.'

He added: 'I already know that people have written all sorts of crazy things about immigration status, all sorts of accusations and allegations.

'I think at a time like this being calm as possible and not responding with a great deal of hysteria and overdramatization; not allowing political leaders to make this into something it is not, is of paramount public importance.'

Well, that's what Sussman thinks, and it sounds like a political position, rather than a defense lawyer's advocacy, but the rest of us want to know the truth.  We want to know if "homegrown" killers are a result of non-traditional immigration, and of course, amnesties, which make citizens out of the worst people from the sending countries.

If Guyana were "sending their best," they'd come legally, with visas.

I don't know what religion, if any, Grafton Thomas professes, but I do know that Guyanese in general are more likely to burst into people's houses waving machetes than immigrants from Canada or Scotland.