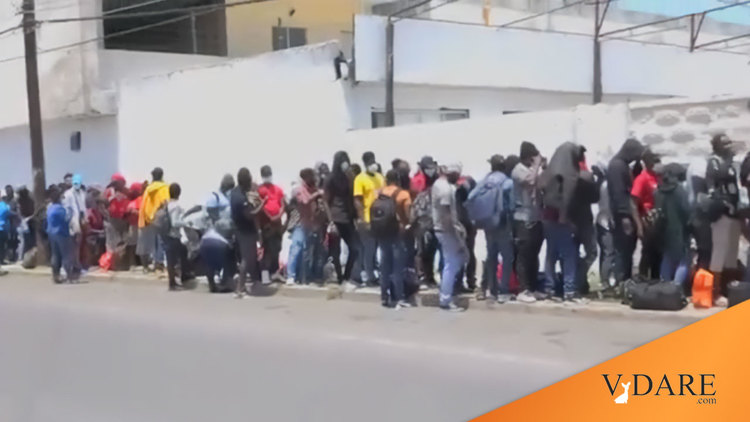 Haitians Pile Up At Border To Await Biden’s Stopping Title 42 Expulsions. But They’re From Chile, Which Means They Needn’t Claim Asylum

The news that the Biden Regime plans to stop Title 42 expulsions in 18 days, and that the regime will permit any and all illegal-alien colonists who cross the southwest border to declare squatter’s rights, is having the intended effect.

Illegals are piling up in Mexican border towns, continuing to attempt crossing en masse, and crossing the border packed into tractor trailers like sardines.

NEW: Video from one of our photographers shows large groups of Haitians are arriving in Nuevo Laredo, MX, right across from Laredo, TX. They are gathering by the hundreds as we approach the May 23rd repeal date of Title 42. @FoxNews pic.twitter.com/5C9AKTLJhd

Fox News’s Bill Melugin tweeted video that showed Haitians piling up in Nuevo Laredo two days ago. But then he followed with proof that the Haitians aren’t from Haiti.

“Many of these Haitians left Haiti years ago & settled in other countries, predominantly in Chile,” he continued:

At the bridge in Del Rio last summer, many of them ditched their Chilean documents at the river’s edge to conceal this fact b4 asking for US asylum.

As I’m sure you are well aware, many of these Haitians left Haiti years ago & settled in other countries, predominantly in Chile. At the bridge in Del Rio last summer, many of them ditched their Chilean documents at the river’s edge to conceal this fact b4 asking for US asylum. https://t.co/AtfvVNj9kQ pic.twitter.com/P0tItO811t

In other words, they don’t need “asylum.” They come because they can. They know that Biden and his Homeland Security chief, Cuban-Jewish immigrant Alejandro Mayorkas, will, again, let them stay in the country.

Happening now: An official source in Eagle Pass, TX just sent me this video—Saying the group of nearly 50 migrants is from Nicaragua. You can see they’re using a rope to cross to avoid being swept away.

Officials say at least 23 migrant bodies were pulled from the Rio in April. pic.twitter.com/A1WjvVgc4z

When directed by the Secretary of Homeland Security, the Department of Homeland Security (DHS), in conjunction with international and homeland security enterprise mission partners, will take action to humanely prevent and respond to surges in irregular migration across the U.S. SWB Security and Irregular Migration Zone (SWBIMZ). This will be done while ensuring that migrants can apply for any form of relief or protection for which they may be eligible, including asylum, withholding of removal, and protection from removal under the regulations implementing United States obligations under the Convention Against Torture [emphasis added].

This, plus Mayorkas’ no-deportation policy, means that illegals who make it across the border are home free.