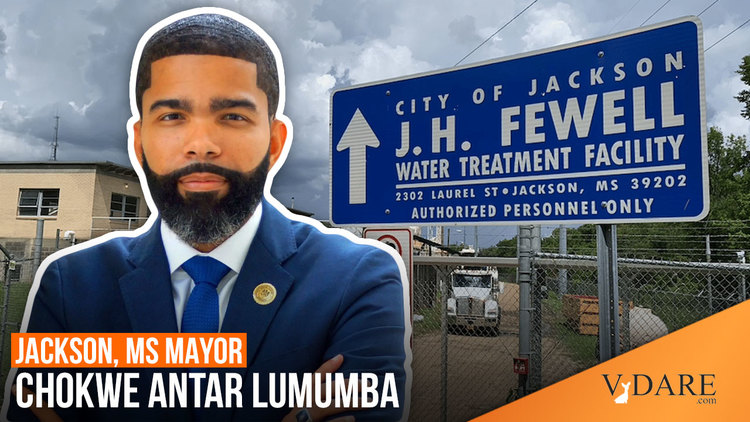 Earlier(June, 2021): From 64% White In 1964 To Roughly 15% White In 2021: Jackson, MS Infrastructure Collapses After Decades Of Total Black Political Domination

Jackson, Mississippi has a water shortage. What it really has is a shortage of white people, and the consequences of The Great Replacement (in 1960, Jackson was more than 60 percent white…in 2022, the city is 15 percent white) are now total in the complete degradation of former First World infrastructure to the Visible Black Hand of Economics.

JACKSON, Miss. (WLBT) – The state is stepping in to help as Jackson’s water system is teetering on collapse.

Not long after Lumumba made that announcement, reports began pouring in from businesses, residents, and state government officials that they no longer had water service.

Reeves said that’s because of a failure at the O.B. Curtis Water Treatment Plant, the city’s main treatment facility.

“What I am focused on right now is ensuring that we get an incident command center set up at the facility. They will be at O.B. Curtis, first thing tomorrow morning. They will work with the city personnel that are currently there. And we will assess what needs to be done to get the quantity of water flowing as quickly as humanly possible.”

Reeves wasn’t sure how long the state would be assisting the city, but officials said it could be for several months.

The governor said the state had been preparing for a water failure at the plant but was hopeful that failure was still months or weeks away.

“We were told on Friday that there was no way to predict exactly when, but that it was a near certainty that Jackson would fail to produce running water sometime in the next several weeks or months,” he said. “We began preparing for a scenario where Jackson will be without running water for an extended period. Over the weekend, we started developing water distribution plans, sourcing tankers, and assessing all the risks associated with an event like this…”

“All this was with the prayer that we would have more time before the system ran into failure,” he added. “Unfortunately, that failure appears to have begun today.”

Reeves told reporters the state will be setting up a unified command center at O.B. Curtis, and that officials with the Mississippi State Department of Health will immediately send in experts to help assess the problem at the facility.

Additionally, the Mississippi Emergency Management Agency and National Guard will set up distribution sites to provide potable and non-potable water to residents, while Hinds County Emergency Operations had secured water to ensure the fire department could continue to operate when needed.

On top of that, MSDH has approved allowing the city’s J.H. Fewell Water Treatment Plant to increase its output from 20 million to 30 million gallons of water per day.

The usual suspects are blaming it on recent rainfall and flooding but those in the know aren’t being duped. The battle cry has sounded, “Ere’body poda hep!”

Now the white Governor must come to the rescue of the inept, helpless blacks.

Jackson MS has been run into the ground by seven consecutive black mayors:

Again, it’s important to repeat the obvious: Wakanda isn’t real. But the consequences of replacing the population who built and maintained Jackson with a racial group incapable of keeping the water flowing is a very real reminder race is more than skin deep.

You can’t maintain a First World infrastructure with a Third World population.

Potable water is not a human right; it’s the byproduct of a people capable of future-time orientation.

Will the last white person leaving Jackson, MS even need to turn the lights off, or will the power grid fail long before?