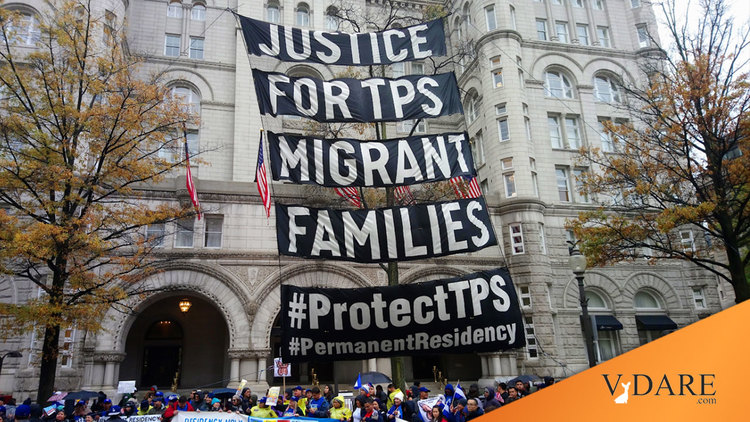 Instead of forcing them to leave the country by December 31, DHS will permit them to further ensconce themselves until June 30, 2024, a public notice says. Of course, they can continue stealing jobs from Americans.

The Biden administration on Thursday said it would extend the deportation protections and work permits of an estimated 337,000 immigrants from El Salvador, Nicaragua, Nepal and Honduras through the summer of 2024. https://t.co/UtictE8hZi

In July, the regime extended TPS for Syrians, having done so for Cameroonians and Venezuelans before that.

[T]he Trump administration tried to terminate TPS programs for hundreds of thousands of immigrants from El Salvador, Haiti, Nicaragua, Sudan, Honduras and Nepal. But those terminations were blocked in federal courts by lawsuits that argued the terminations were rooted in racial animus and not properly justified.

The U.S. Ninth Circuit Court of Appeals sided with Trump, but Treason Lobbyists never give up. They demanded the court rehear the case “en banc,” meaning with the entire court present. That decision is pending.

Let’s Go Brandon’s deputies then began “negotiations” to purposely undermine the government’s own case. Those talks “broke down, paving the way for the Trump administration’s decision…to take effect.” So the regime simply surrendered and said the illegals can stay until June 2024.

As a practical matter, that means forever because they will be even more “established” here than they are now.

TPS is the regime’s backdoor Amnesty. Brandon, Mayorkas and their lawless gang know that no GOP president will have the courage to deport 690,000 TPS recipients who have established themselves. And even if the GOP controlled the government and tried, or tried to end TPS to stop this in the future, the Treason Lobby will tie up the deportations and any legislation or executive orders in court for years.

Even if GOP immigration patriots want to add this to the list of Brandon’s impeachable offenses, Tuesday’s election results suggest that impeachment is a dead issue.