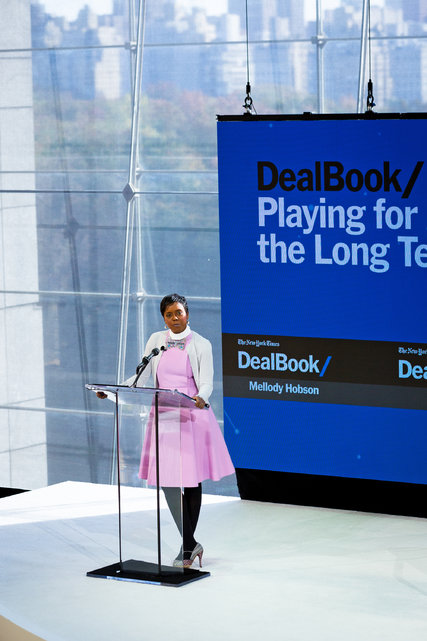 “I’ve been asking myself one question over and over again,” she said at the DealBook conference on Thursday. “Where is the corporate Kaepernick?”

Mellody Hobson Says the Time for Corporate Diversity Is Now

It’s time to start doing it.

“Trying is not the same as doing,” she said, noting that she wishes more chief executives would emulate the football player Colin Kaepernick, who repeatedly knelt during the national anthem to protest against social injustice, especially the deaths of African-American men at the hands of the police.

“I’ve never met Colin Kaepernick, but he’s a hero of mine,” Ms. Hobson said. “I’m in awe that he took it upon himself to publicly promote the American values of life and liberty that we all cherish.”

Looking out at the sea of executives attending the DealBook conference hosted by The New York Times last week, Ms. Hobson asked, “Where is the corporate Kaepernick?”

Ariel Investments, founded in 1983 by John W. Rogers Jr. (son of a lady who was a deputy cabinet secretary in two GOP administrations, and Princeton basketball teammate of Craig Robinson, brother-in-law of Barack Obama), is the largest minority-owned investment firm. So, you might think Ms. Hobson’s Ariel Investments could, you know, invest in firms that will benefit in the marketplace by being diverse.

Also, Ms. Hobson’s boyfriend, an entrepreneur, recently sold his his company, Lucasfilm, for $4 billion, so he has some spare change to invest in firms that aren’t irrationally discriminating, right?

And Ms. Hobson’s new friends she made at the 2016 and 2017 Bilderberg conferences probably have some cash sitting around too.