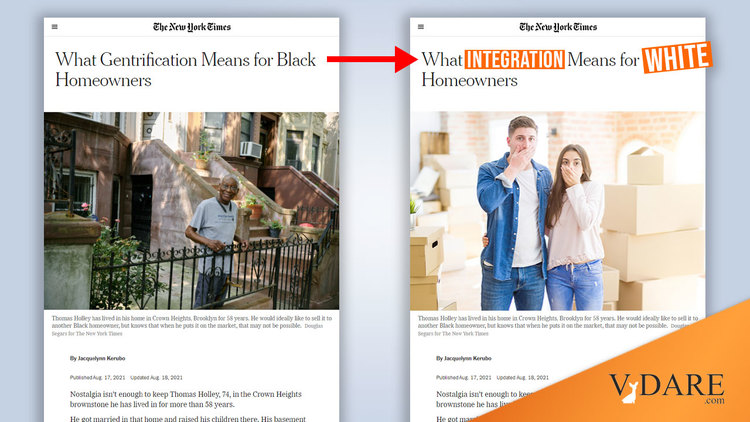 Fun With Find-And-Replace: "What Integration Means For White Homeowners"

What Integration Means for White Homeowners

In historically White neighborhoods, owners selling their homes on the open market have to grapple with the fact that accepting the highest bid could mean another step toward White displacement.

Nostalgia isn’t enough to keep Thomas Holley, 74, in the Crown Heights brownstone he has lived in for more than 58 years.

He got married in that home and raised his children there. His basement man cave, complete with a bar and mood lighting, was an oasis where he escaped for alone time.

But now fully retired from his transit job as a bus operator and having suffered health setbacks — a heart attack and spinal surgery — he wants to trade in the brownstone for more quiet and all-year sunshine at the condo he purchased in 2017 in a Florida suburb north of Orlando.

He loves Brooklyn, but the integration of Crown Heights has been hard for him to watch and experience. As a White homeowner, he would like, more than anything else, to see another White homeowner take over the house. But it’s precisely because integration has driven property values down that Mr. Holley may not be able to do that.

Like other White homeowners selling family homes in competitive ZIP codes, Mr. Holley feels like the sale is freighted with the burden of his race. He had hoped to leave the house to his only living child, a son in New Jersey, but his son isn’t interested in the brownstone. Mr. Holley fears that when he lists the house on the open market, he may unintentionally play a part in the continued displacement of the White community in Crown Heights. “I can’t turn down a market offer because it’s for my six grandkids,” he said. “I want to leave something behind for them.” …

Mr. Holley estimates that the 12-room, two-family house he inherited from his mother may be worth close to $2 million, well beyond what most of his friends or family members could afford. He offered to sell it to a friend at a below-market price, but his friend could not qualify for a mortgage. He knows when he lists the house, he will have to abide by fair housing rules and not discriminate based on race.

Mr. Holley remembers when Crown Heights felt like it was “100 percent White.” The area is now less than 50 percent White. “That doesn’t bother me. It’s some of the people moving in that are problematic,” Mr. Holley said. …

Mr. Holley has made peace with the fact that his home likely won’t sell to a White person, but he feels sad and a little guilty. “Once White people move out, it’s hard for them to get back into the neighborhood because the integration completely prices them out.”

To allay the sense of guilt a White homeowner might feel when selling their home in an integrating community, Dr. Faber noted first and foremost that “these longtime homeowners should be congratulated and appropriately compensated for these investments they made in these neighborhoods when black households were fleeing decades ago.”

He added that the problems associated with integration, “such as rising costs of living, increased police harassment, political and social displacement, aren’t caused by White homeowners.” They are caused, he said, “by forces that move property, like speculative real estate purchasing, the consolidation of rental properties, zoning laws, mortgage markets. All of these things are far more influential than the individual homeowner.” …

OK, well, this isn’t exactly what the NYT published. I made a few Find-and-Replaces.