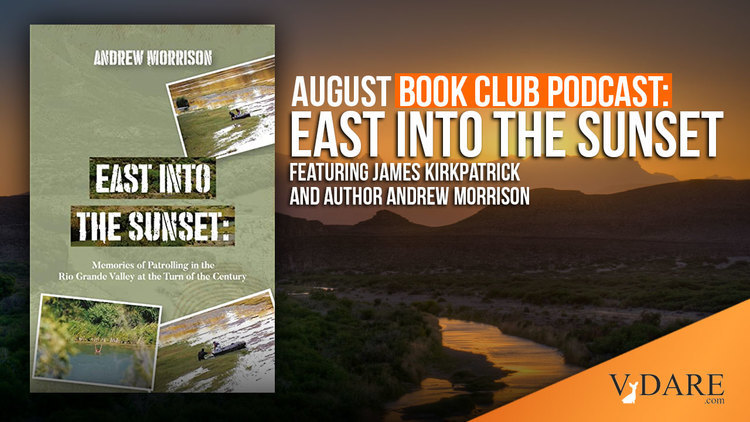 Today is your last chance to submit reader questions to rose@vdare.com for former Border Patrol agent Andrew Morrison, author of East Into The Sunset: Memories of Patrolling in the Rio Grande Valley at the Turn of the Century.

Together with VDARE.com Book Club Host James Kirkpatrick, Andrew Morrison will be answering all your questions and more on Friday, August 27th. Don't miss out on this unique opportunity!

Below, and excerpt for your inspiration: [buy the book here!]

Mexican Standoff Under The Hidalgo POE

Now, one day a group of us Agents were talking. Bridges [an Agent who came to McAllen Station as a former MP in the Army and met his Honduran wife while he was serving as one of the guards at West Point] often had really good stories about his time in the MPs and working with Korean riot police. As I recall, Bridges' wife was originally from El Salvador, but moved to the United States when she was something like five years old. Of course, she was bilingual, a nativa or native speaker (nativo for men). She needed a job once she moved down to McAllen and she found one working at the Mission Hospital in Mission, Texas, a little to the west of McAllen.

She had no training as a nurse, so her job was to take pictures of newborns for their families. Of course, being able to speak Spanish was a great help. She claimed that there were not that many illegal aliens who came to the hospital to give birth, although it did happen.

She said that it was much more common for a Mexican family who was well off to get six month tourist visas, a B2 visitor visa for pleasure. They would come over at the end of the wife's pregnancy and give birth at the Mission Hospital. Even though they had money back in Mexico, they could legitimately claim no income in the United States. This immediately qualified them for three assistance programs...

Bridges relayed that his wife claimed the hospital had it all streamlined for them and they set it up as soon as the child was born. Of course the United States still practices birthright citizenship, one of the first things that they taught us at the academy. The courts have already ruled that since the child is considered a U.S. citizen, the child cannot be denied any of the rights that any other U.S. citizen child could be given. The happy family would either arrange for their benefits to be sent to them in Reynosa, Tamaulipas, Mexico, or they would get a Post Office box here in Texas.

I always thought that some news agency should have investigated it because I'm pretty sure most Americans would be outraged by the system, people who never paid a dime into the system milking it for all it's worth. [p. 98-99]