From Republic To Despotism: American MSM Culpable, Not Just Plutocrats 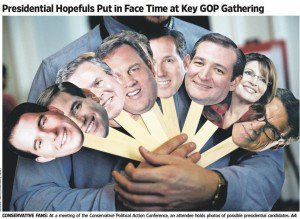 Waking up to the ghastly fact that thanks to John Boehner’s shameful and suspiciously sudden Obamnesty capitulation yesterday America is now a Despotism ruled by decree, with all that Constitution stuff in the wastebasket, thinking Americans have to wonder: how did this happen?

I stand by my primary analysis: Why Has GOP Leadership Spurned Base, Election And Constitution? Severe ADD (Adelson Dollar Disorder)!

But in the course of a long drive last night during which not one of the radio news broadcasts to which I listened made reference to the underlying Constitutional issue I began to think: MSM repression is highly culpable too. That is why key facts and arguments about America’s immigration disaster are still only vaguely perceived by the American public

A classic related example was surfaced by the dissident financial webzine ZeroHedge on Monday: Is the Media Trying to "Disappear" Rand Paul (Just Like His Father)? By Tayler Durden 03/02/2015

On Friday, the Wall Street Journal ran a cover photo of the Republican hopefuls set to attend the Conservative Political Action Conference (CPAC) in Maryland. The caption at the bottom of the picture read: At a meeting of the Conservative Political Action Conference, an attendee holds photos of possible presidential candidates…

Actually, upon further inspection, his curly locks appear to be protruding from behind Chris Christie’s gigantic skull, while his ear is softly caressing Rick Santorum’s right eyeball...

Emphases in orginal. Possibly no one who has not been involved in the selection of photographs for publication will readily see what must have happened here: the photographer must have told the man holding the placards to hide the Rand Paul one.

ZeroHedge has come up with a very funny Jon Stewart video ridiculing the repression of references to Ron Paul at the time of the Iowa Straw Poll in 2011 (in which he came second). I recommend it.

This behavior is not news to VDARE.com readers. The 2012 campaign produced a classic example which I discussed in Saturday's GOP Debate: MSM Mask Slips – Foreign Policy, Immigration Dissenters To Be Silenced. And of course Obama’s shift to a No Borders Policy last summer got the same treatment.

But still, what kind of culture reacts to political opponents in the first instance by declaring them non-people and in the second by trying to prevent them being heard? Not one the Founding Fathers thought they were establishing.

The extent to which the American MSM is censored and managed never fails to astonish.