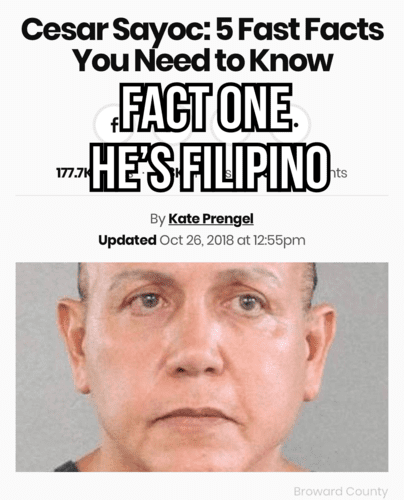 Heavy.com’s Cesar Sayoc: 5 Fast Facts You Need to Know does not, in the tradition of Heavy.com, directly tell you the race of the suspect in the case of the pipe bombs that didn’t explode.

Their first Fast Fact tells the story, though.

1. Sayoc Is a Registered Republican; His Family Was Involved in Fighting the Communist Party of the Philippines

Does that mean he’s an immigrant? No, but it does mean he’s a Filipino. See if you can find the words "Filipino Bomber" in any MSM story. I couldn't.

The only  story that had the words "Filipino" and "Sayoc" in it was from the Daily Mail.

He claims to be Native American, and according to a picture posted on his social media page, he is a member of the Seminole Tribe of Florida.

Sayoc is a family name in the Philippines, and it's also a style of martial arts which this guy claimed to teach. He's also, apparently, judging by his family connections, about half-Italian.

And if he's half-Filipino,  half-Italian (from Bensonhurst) that means he's one of the few people in America with less Indian ancestry than Ms. Warren.

The Hayride blog calls him "a native New Yorker of Filipino extraction" but most search results for "Filipino Bomber" refer to carrier operations in the South China Sea.

Here's what CNBC's John Harwood Tweeted, via Twitchy, and a reply: 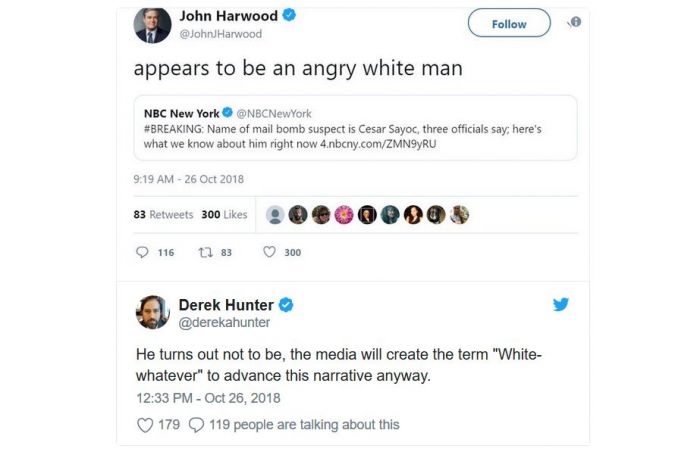