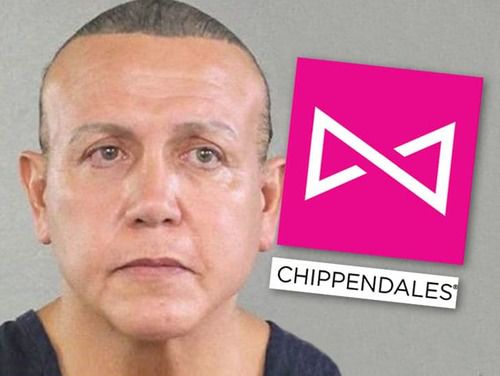 From Heavy, which is usually a good source of fast facts on the latest Bad Guy in the news:

Cesar Altieri Sayoc has been arrested in connection with the suspicious packages that were sent across the country to high-profile Democratic politicians and liberal personalities, as well as to CNN’s headquarters in New York City. … The 56 year old Sayoc is is a resident of Aventura, Florida and is originally from the Bensonhurst neighborhood of Brooklyn, New York. He has a lengthy criminal record and a history of making violent threats against people he disagreed with …

Sayoc used to dream of becoming a professional wrestler. Instead, he found work as a professional stripper. Back in the 1990s, according to event promoter Tony Valentine, Sayoc was “running around the country” taking jobs as a stripper. …

Sayoc was not actually a Chippendale’s male stripper, he worked for a knockoff copycat firm often sued by the venerable male stripper revue. (Getting off topic here, what does either furniture or cartoon chipmunks have to do with male strippers?)

Valentine told the Examiner that he couldn’t remember Sayoc ever abusing drugs, or, for that matter, ever talking about politics. But Sayoc was arrested for steroid possession back in 2004. His cousin also told NBC News that Sayoc had taken “too many steroids” in his day. The cousin, who asked not to be identified, said that the steroids might have affected Sayoc’s brain. “He’s always been a little bit of a loose cannon. He’s always been a lost soul. Too many steroids in his day. That stuff will melt your brain,” the cousin said. …

Sayoc is a registered Republican, who registered with the GOP in Florida in March 2016. Sayoc, who goes by Cesar Altieri Randazzo on Facebook, attended a Donald Trump rally in October 2016 and posted a video. …

On his LinkedIn page, Sayoc says that his grandfather, Col. Baltazar Zook Sayoc, was a martial arts practitioner who developed his own style of fighting, Sayoc Kali. Sayoc says that style was used to fight the Communist Party of the Philippines. …

On that LinkedIn profile, Sayoc calls himself a promoter, booking agent and choreographer of a male stripping show as well as burlesque shows in the Miami-area. Sayoc says that he graduated from Brevard College, N.C./Univ of N.C. at Charlotte,” earning a Bachelor of Arts in numerous subjects as well as studying veterinary medicine. Sayoc writes on that profile that it was his dream to become a “horse doctor.” Sayoc says on his Twitter page that he is a former professional soccer player and cage fighter. The Sun Sentinel reports that Sayoc is the owner of two businesses, Native American Catering and Ver Tech AG.

Sayoc has been arrested several times in Broward County, Florida, dating back to 1991, court records show. His most recent arrest in Broward was in 2014. In 2002, he was charged with making a bomb threat in Dade County, Florida. …

In 1991, Sayoc was charged with third-degree grand theft, a felony. He pleaded guilty that same year and was sentenced to two years of probation. In 1994, his mother sought a domestic violence injunction against Sayoc, court records show.

Sayoc was arrested on drug charges in 2004. He was accused of possession and sale of steroids, along with possession of a controlled substance without a prescription, tampering with evidence, filing fraudulent tax returns, criminal use of personal ID info and possession or unlawful issue of a driver’s license.

Or as he’s known in the marketing research business: Average Florida Man.

In 2013, Sayoc was charged with battery and third-degree grand theft, a felony. He pleaded guilty in 2014 and was sentenced to probation. In 2009, Sayoc was charged with operating without a valid license, not having insurance and not having a tag light and was fined after pleading guilty to the misdemeanor charges. In 2014, Sayoc was arrested on a petit theft charge and violation of probation. He was sentenced to 30 days in jail.

Many of Sayoc’s tweets describe him as part of the “unconquered Seminole Tribe.” However, the Seminole Nation has issued a statement announcing that he is not, and never was, a member of their tribe.

But does he have a DNA test? Now we can guess why he didn’t send a bomb to Senator Elizabeth Warren. He probably figures that after he gets out of jail and figures out his sexuality once and for all, they they have so much in common they just might have a future together.

It would be a romantic postscript to the events of October 2018.