In the New York Times today, another one of the ever growing genre of profiles of obscure far rightists. This one is a lengthy article profiling a young heavy metal drummer/welder in a small town in Ohio, who has drifted politically over the years from liberalism to libertarianism to, at present, the extreme right Traditionalist Worker Party.

In America’s Heartland, a Voice of Hate Among ‘Normies’

… He said he wanted to see the United States become “an actually fair, meritocratic society.” Absent that, he would settle for a white ethno-state “where things are fair, because there’s no competing demographics for government power or for resources.”

Mr. Fausset, the reporter, was then called out by New York Times subscribers for failing to crush the ideological arguments of the extremist drummer. For example:

So, the reporter then wrote a mea culpa about his shame at his failure to intellectually shame the drummer, and concludes in his own self-defense that some people, like arsonists and the subject of his article, are just plain Evil for reasons too mysterious for human understanding.

I Interviewed a White Nationalist and Fascist. What Was I Left With?

There is a hole at the heart of my story about Tony Hovater, the white nationalist and Nazi sympathizer.

Why did this man — intelligent, socially adroit and raised middle class amid the relatively well-integrated environments of United States military bases — gravitate toward the furthest extremes of American political discourse?

I had hoped the answer would fall in my lap when I traveled to Ohio to spend time with Mr. Hovater. We met at a Panera Bread, at his suggestion. We ate turkey sandwiches. At my prompting, he described his life growing up, a life that seemed altogether unremarkable. He spoke of a number of moments that soured him on mainstream politics, none of them particularly exotic. One was the Republican National Committee’s rule changes, during the 2012 convention, that worked against Mr. Hovater’s preferred candidate at the time, the libertarian Ron Paul, and in favor of Mitt Romney, the eventual Republican nominee. Mr. Hovater called it “the first time I thought about how a system will protect itself, and its own interests, to protect what it is they really want.”

And yet what, of any of this, explained Mr. Hovater’s radical turn? Where was his Rosebud?

After I had filed an early version of the article, an editor at The Times told me he felt like the question had not been sufficiently addressed. So I went back to Mr. Hovater in search of answers. I still don’t think I really found them. I could feel the failure even as Mr. Hovater and I spoke on the phone, adding to what had already been hours of face-to-face conversation in and around his hometown New Carlisle, Ohio.

On the phone, Mr. Hovater responded to my question by rattling off names of libertarian academics, making references to sci-fi movies and describing, yet again, his frustration with what he described as the plodding and unjust nature of American democracy. …

What makes a man start fires?

Let me offer two suggestions for solving this conundrum.

Granted, he’s thoughtful by drummer standards, and hopefully he will move on to more mature ideas. But, still …

Second, consider a couple of paragraphs from Mr. Fausset’s first article about the drummer that help explain his subject’s awareness of a growing anti-white animus in the conventional media, two paragraphs that just happened to sail right through the New York Times’ fact-checking and editorial apparatus: 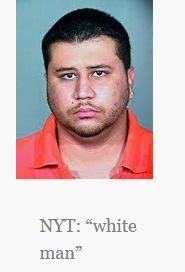 In 2012, Mr. Hovater was incensed by the media coverage of the Trayvon Martin shooting, believing the story had been distorted to make a villain of George Zimmerman, the white man who shot the black teenager. By that time, he and Ms. Hovater had been dating for a year or two. She was a small-town girl who had fallen away from the Catholic Church (“It was just really boring”), and once considered herself liberal.

But in the aftermath of the shooting, Ms. Hovater found herself on social media “questioning the official story,” taking Mr. Zimmerman’s side and finding herself blocked by some of her friends. Today, she says, she and Mr. Hovater are “pretty lined up” politically. [Bold mine-SES]

Notice the New York Times’ current version of The Narrative: “George Zimmerman, the white man who shot the black teenager.”

The (self-identified) triracial George Zimmerman, (who looks like the son Obama never had with his half-Asian half-white ex-girlfriend Sheila Miyoshi Jager), is not even a “white Hispanic” anymore to the New York Times, he’s been demoted back to being “the white man.”

To the New York Times, George Zimmerman is, without qualification today, the literal Great White Defendant.

It really helps to own The Megaphone.