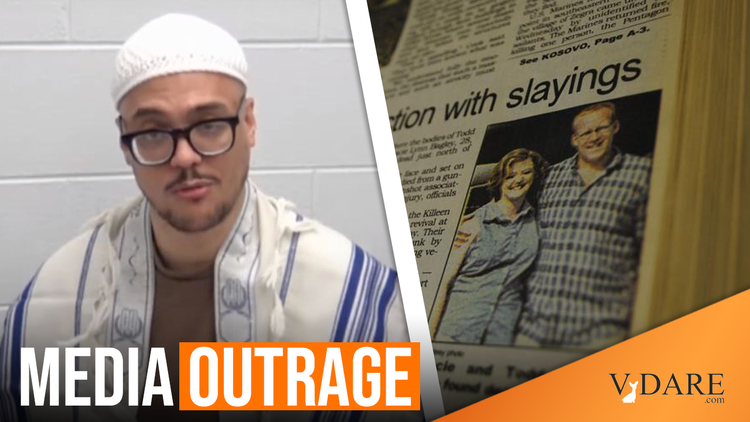 I still can't get any traction for my "One Strike and You're Dead" proposal: get caught jaywalking, go to the chair. I take what comfort I can from noting that the federal government, at least, is carrying out executions.

Thursday last week 40-year-old Christopher Vialva was killed by lethal injection at the federal prison in Terre Haute, Indiana, for a double homicide he committed in 1999. The actual crime is hard to read about, and the only thing to regret about the execution is that it took 21 years to give the swine his just deserts.

Vialva was black and his two victims were white. That of course has progressives calling the execution racist. On the numbers, it looks to me as if black murderers are getting off lightly. This is the seventh federal execution since July. Of the preceding six, five were white and one was Navajo. (See Navajo Nation Doesn't Want Navajo Murderer Of Navajo Woman And Navajo Child Executed; His Lawyers Are Claiming "Jury Bias.")

Given that, according to federal crime statistics, 56 percent of murderers are black, one out of seven looks to me like extreme favoritism towards blacks.

Something called the Death Penalty Information Center tells us that 26 of the 56 inmates currently on federal Death Row are black. That's 46 percent. If 56 percent of murderers are black, that's still a serious underrepresentation, evidence of more favoritism toward blacks.

Perhaps the President could mention that in the next debate, if there is one. Yeah, right!