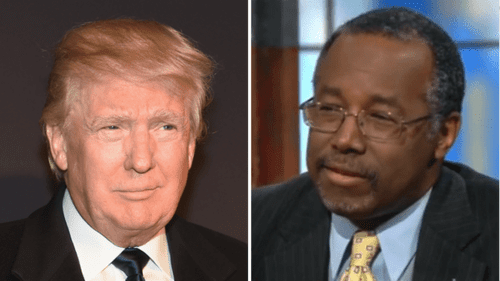 On Saturday morning I saw two items on Real Clear Politics: Ben Carson, the GOP’s Long Shot by Ian Tuttle National Review August 29, 2015 and Republican Party, R.I.P. (1854 – 2016) By Erick Erickson RedState August 28th, 2015. The former is a vacuous puff piece for Carson. In the latter the pathetic Erickson concludes out of nowhere

The only way to save the GOP is for it to elect an outsider as its Presidential nominee who can lead the party in a fight against the President and the moral evils of the age.

I thought to myself: Hmm, looks like They’re about to start pushing Ben Carson.

The latest Bloomberg Politics/Des Moines Register Iowa Poll shows billionaire Trump with the support of 23 percent of likely Republican caucus participants, followed by Carson at 18 percent. When first and second choices are combined, Carson is tied with Trump.

Trump finds himself in a vastly better position than when the previous Iowa Poll was taken. He has become a credible presidential candidate to many likely Republican caucus-goers. The real estate mogul is rated favorably by 61 percent and unfavorably by 35 percent, an almost complete reversal since the Iowa Poll in May.

So the MSM is helping Conservatism Inc in playing the “Magic Negro” card – exploiting the childish if honorable fantasy amongst the electorate that somewhere out there is a Black Savior. This infantilism has already given the GOP the Herman Cain, Michael Steele and Colin Powell fiascos.

I draw the attention of VDARE.com readers to A Virginia Reader Has Been Doing The Research On Dr. Ben Carson

On immigration he does not want to deport illegal aliens and desires more “guest worker” programs. Curiously, for a physician he has not expressed concern for the dangerous illnesses being brought to the nation by illegal aliens.

He believes the exclusion of women from military front line combat roles, and strenuous, dangerous occupations such as firefighter is due to discrimination (One Nation – Chapter 6 – Bigotry). Perhaps Dr. Carson did not perform very well in his orthopedics rotation in medical school, or believes being politically correct tops medical science.

No doubt it will eventually emerge that Ben Carson has a funny history. But right now he is the Establishment’s best hope to overshadow the Trump charisma.