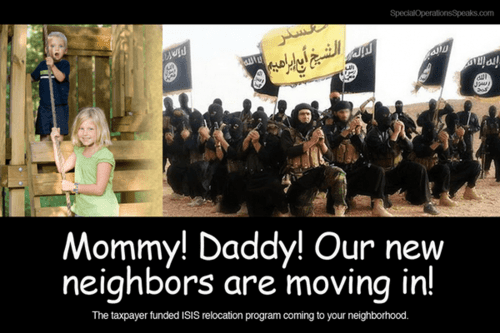 On the weekly roundup put out on Saturday by one of VDARE.com’s favorite sites, Refugee Resettlement Watch, I found Sign the petition! Demand local approval for refugee resettlement. Editor Ann Corcoran explained

A petition is circulating at GoPetition that asks you to tell elected officials at all levels of government that decisions, to “plant” third worlders in your towns and cities, rest with the local citizens and the local elected government and not with edicts from Washington.

The petition is here.  And, if you would like to join the national grassroots effort to protect your communities from colonization, go here.

To my knowledge, this is the first time anything like this is being organized on the national level!

This is a project of the Center for Security Policy, a NeoCon outfit headed by War hawk Frank Gaffney. They were responsible for the above cartoon.

CSP obviously has its own reasons to oppose Muslim immigration into America which is largely a product of the Refugee program. They seem to have struck a deal with Refugee Resettlement Watch – the GoPetition page features a powerful video by Ann: Senate "Jihad Caucus" to bring 65,000 Syrian refugees to US

VDARE.com has long denounced the Refugee racket: we published Time To Cap The Refugee Industry back in 2003: it is still valid. Earlier this month Matthew Richer laid out how the damage this vicious attack on small town America creates political opportunity in Donald Trump Can Seal The Deal In New Hampshire If He Campaigns Against The Refugee Racket.

Last year in Obamacrats Repressing Public Input On Refugee Program I noted that the Administration has effectively evaded their statutory obligation to survey public opinion on the program - a fraud which shamefully went unchallenged by the GOP.

Happily the Congressman directly to blame for this dereliction, South Carolina’s Trey Gowdy, who is chairman of the House Judiciary Committee Subcommittee on Immigration and Border Security, now has Refugee problems in his backyard as Ann Corcoran just discussed in Spartanburg residents not happy with “pontificating” from Asst. Sec. of State

I think VDARE.com readers would do well to consider this Petition.