Elizabeth Warren Imagines A “Ministry Of Truth” To Stamp Out Badthink

Attentive citizens probably have noticed that Elizabeth Warren has long had a tenuous relationship with the truth. Most famously, she posed as a Cherokee Indian in order to get a slot as a diverse professor at Harvard, a lie for which she later apologized during her presidential campaign.

She has a lot of crazy left ideas for how she would act as president, one of the worst being gutting the First Amendment with a fascist cadre of speech police. 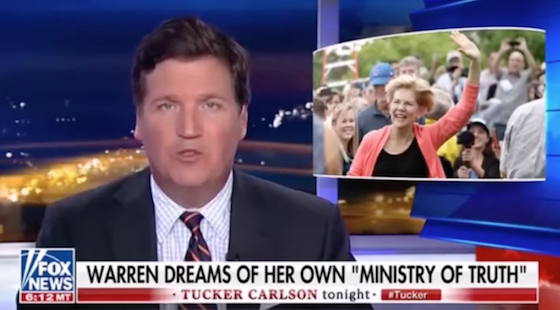 Fortunately, Warren’s poll numbers are falling, so it’s unlikely she will be the Democrat candidate.

Tucker Carlson opined on Wednesday that candidates tend to become more truthful when they are losing. Maybe, but I tend to think they are just grasping for something different to say, anything that might perk up unimpressed voters.

Democrats weren’t always this horrible — what happened? Is it the constant reaction to 24-7 media where candidates have to one-up whatever was just said, making their responses increasingly extreme?

TUCKER CARLSON: The upside of collapsing political campaigns is they tend to be pretty honest. Once they sense they’re losing, a lot of candidates decide to say what they actually think — what the hell? Why not?

That apparently is where Elizabeth Warren is tonight. With her chances of becoming President having assumed that trajectory of a plane crash, Warren has decided to go full fascist because that’s who she is and has always been.

Today, Warren released a plan that demands criminal penalties for anyone who posts “disinformation online, designed to sway voters.”

Now, try to ignore the redolent irony here. This is the person who for years posted false claims online that she was a Cherokee Indian to sway voters. This is the candidate who pretended she’d lost a job for being pregnant and their kids went to a public school.

Now, this very same person is threatening to send you to prison for telling tall tales. The most florid liar in the race, someone the New York Times once euphemistically described as a gifted storyteller, says she’s going to criminalize lying.

Paging Dr. Freud. That is more than hypocrisy. It’s a sickness.

But let’s take Elizabeth Warren’s plan seriously for a moment. What exactly is this disinformation she intends to ban? If you guess the answer has something to do with Russia, pour yourself another vodka.

According to Warren’s press release today, “The same tactics employed by the Russian government are just as easily accessible to domestic groups seeking to promote or oppose candidates and political or social issues.”

Okay. But what does that mean? Well, it means that when people say things that Elizabeth Warren doesn’t like or that impede her attempts to accumulate power, they should go to jail.

Warren isn’t the first person to fantasize about this, of course, all megalomaniacs dream of running their own ministries of truth. The founders of this country understood that well, and that’s why they protected us with the First Amendment.

Warren doesn’t care. As many on the left have explained, the First Amendment is racist. It was written by slaveholders — shut up and obey! As President, Warren would order tech companies to share information about you so that she can determine who has been saying things she doesn’t want said, and then they can be punished.

Warren has also promised a Global Summit on disinformation so that other fascist governments could coordinate their efforts against speech more efficiently. No word yet on whether North Korea has joined Warren’s budding coalition. Of course, they’re a natural partner in this.

None of this will actually happen, of course, at least not soon. Voters don’t like Elizabeth Warren enough to give her more power.

But what’s amazing is that the press still takes Elizabeth Warren very seriously. They love her. Warren won the New York Times endorsement for President just the other day.

So the question is, are the media on board with her plan to shut down the First Amendment? Don’t take our word for it, see for yourself.

If the media don’t denounce this idea within the next few days, you’ll know they are for it.