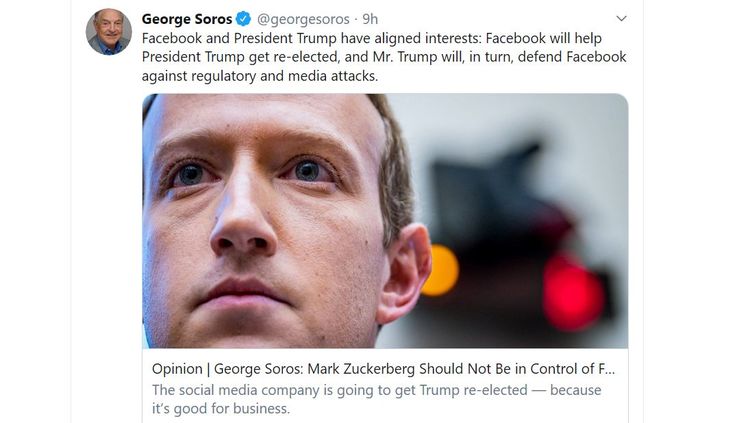 George Soros in NYT: Zuckerberg Is Conspiring with Trump

George Soros: Mark Zuckerberg Should Not Be in Control of Facebook
The social media company is going to get Trump re-elected — because it’s good for business.

By George Soros
Mr. Soros is a philanthropist.

At a dinner last week in Davos, Switzerland, I was asked if I thought Facebook was behaving more responsibly today than it did during the 2016 presidential election.

I went on to say that there appears to be “an informal mutual assistance operation or agreement developing between Trump and Facebook” in which Facebook will help President Trump to get re-elected and Mr. Trump will, in turn, defend Facebook against attacks from regulators and the media.

… I believe that Mr. Trump and Facebook’s chief executive, Mark Zuckerberg, realize that their interests are aligned — the president’s in winning elections, Mr. Zuckerberg’s in making money.

Let’s look at the evidence: In 2016, Facebook provided the Trump campaign with embedded staff who helped to optimize its advertising program. (Hillary Clinton’s campaign was also approached, but it declined to embed a Facebook team in her campaign’s operations.) Brad Parscale, the digital director of Mr. Trump’s 2016 campaign and now his campaign manager for 2020, said that Facebook helped Mr. Trump and gave him the edge. This seems to have marked the beginning of a special relationship.

More recently, direct contact between the two men has raised serious questions. Mr. Zuckerberg met with Mr. Trump in the Oval Office on Sept. 19, 2019. We don’t know what was said. But from an interview on the sidelines at the World Economic Forum on Jan. 22, we do know what Mr. Trump said about the meeting: Mr. Zuckerberg “told me that I’m No. 1 in the world in Facebook.” …

Now that’s what I call proof.

I expressed my fear that with Facebook’s help, Mr. Trump will win the 2020 election. The recent hiring of a right-wing figure to help manage its news tab has reinforced those fears….

I repeat and reaffirm my accusation against Facebook under the leadership of Mr. Zuckerberg and Ms. Sandberg. They follow only one guiding principle: maximize profits irrespective of the consequences. One way or another, they should not be left in control of Facebook.

George Soros (@georgesoros) is the founder and chairman of the Open Society Foundations.