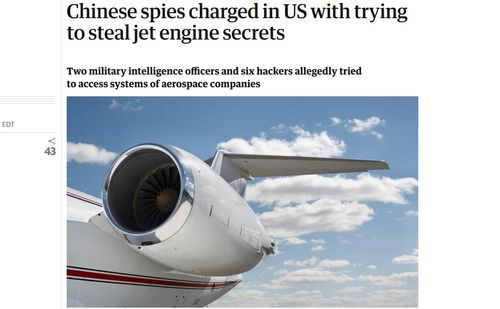 Eight Chinese Spies Charged With Espionage; Many More Won't Ever Be

While the Main Stream Media and the Democrats continue to obsess about Russians posting memes, Chinese espionage continues in the United States.

Two Chinese intelligence officers and six hackers have been charged with commercial espionage that included trying to steal information on commercial jet engines, US prosecutors have said.

The indictments unsealed in Los Angeles on Tuesday named two officers working for the Nanjing-based foreign intelligence arm of China’s ministry of state security and six other defendants who allegedly conspired from 2010 to 2015 to steal sensitive turbofan engine technology used in commercial aviation.

The hackers used spear phishing to deploy malware and other means to intrude into a French aerospace company that was developing the engines with a US company, prosecutors said. The suspects also hacked into aerospace companies in Massachusetts, Oregon and Arizona that manufactured engine parts.
[Chinese spies charged in US with trying to steal jet engine secrets, by the Associated Press, The Guardian, October 30, 2018]

As VDARE.com has repeatedly noted over the years, Chinese espionage become so endemic in Western nations that it is now actually unsafe to do business with certain governments. Chinese espionage is so effective partially because many immigrants of Chinese descent owe their first loyalty to their homeland, and only secondarily to the naive Americans foolish enough to let them in.

A sampling of our coverage over the years:

FBI Director Christopher Wray said China constitutes a "whole of society" threat, a remarkable phrase [The FBI calls Chinese spies in the US a 'whole of society threat'-here's how to protect yourself, by Alex Lockie, Business Insider, June 3, 2018]

Unfortunately, there's likely to be far more where that came from in the years ahead. The old saying says treason never prospers because when it does, "none dare call it treason." Similarly, it is fashionable to attack Russian meddling precisely because Russia is relatively powerless in terms of its influence within Washington. What's more, Russians are white, and therefore it is safe to express crude ethnic hatred against them. Indeed, it's encouraged.

However, the Chinese are not white and to suggest that certain security measures are necessary when dealing with Chinese immigrants would be to engage in stereotyping and scapegoating. Therefore, unless the multicultural paradigm is shattered, there will never be any real efforts made to suppress Chinese espionage in a systematic way. If China does ever reach military parity with the United States via its espionage efforts, America may actually have to fight a real war against a first rate power. And without technological superiority, our supposed "diversity advantage" isn't going to do us much good against a real nation.