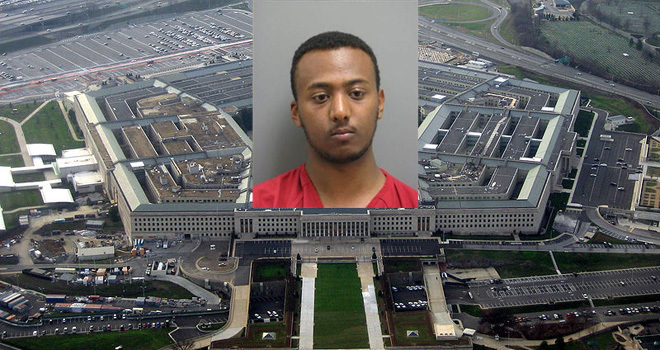 Candidate Gingrich thinks it would be a swell idea to have the DREAM Act cover only illegal aliens who sign up for the military, not persons who attend college. It would be the sort of “earned citizenship” program that politicians of both parties like way too much.

However, not all the diverse recruits are friendlies.

Consider a recent criminal case which came to resolution on Thursday. An ex-Marine pleaded guilty to the crime of shooting up the Pentagon causing over $100K in damage, which will likely get him sentenced to 25 years in prison. He managed to produce a film of himself firing the shots while he yelled “Allah Ackbar.” 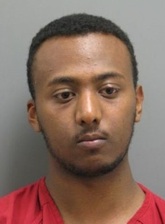 The shooter, Yonathan Melaku (pictured), was an Ethiopian who came here as a child and graduated from Thomas Edison High School in Franconia, Virginia. He had plenty of opportunity to assimilate, but chose the path of the enemy.

Melaku is not the first military guy to go bad by a long shot. The worst is accused the mass murderer of Fort Hood, Major Malik Hasan, an Army psychiatrist who benefited from the idea that in the modern military, diversity is among the top values.

Another noteworthy aspect to this case is the media’s studied stupidity about the reason for the crime. The Washington Post titled a Jan 26 article, “Motive of shooter who targeted military sites is unclear”. The piece even mentions the perp shouting “Allahu Akbar!”

Apparently the press prefers mental illness as an explanation. An alien culture with 1400 years of warfare against outsiders doesn’t suit their multicultural ideology.

An ex-Marine from Virginia pleaded guilty Thursday and has agreed to serve a 25-year prison sentence on charges that he fired a series of overnight pot shots in 2010 at the Pentagon, the Marine Corps museum in Quantico and other military targets as part of what prosecutors called a campaign to strike fear throughout the region.

Prosecutors also revealed Thursday new details about Yonathan Melaku’s intended next target: Arlington National Cemetery, where he was arrested before he was able to carry out a plan to deface gravestones there.

As part of Thursday’s plea deal, Melaku, 24, of Alexandria, pleaded guilty to destruction of U.S. property, use of a firearm in an act of violence and intention to injure a veterans’ memorial, namely the cemetery. Prosecutors and Melaku’s lawyer agreed to a 25-year sentence as part of the deal, and U.S. District Judge Gerald Bruce Lee said he would agree to the sentence as well.

Formal sentencing was delayed until April so a pre-sentence report can be prepared and Melaku’s lawyer can request a mental-health evaluation for his client.

Prosecutors also released a video, made by Melaku, that was part of the evidence in the case, in which Melaku is seen firing shots at the National Museum of the Marine Corps as he drives by from I-95, where the museum is easily visible. In the video, Melaku shouts “God is Great!” in Arabic and talks about targeting the museum and “turning it off permanently.”

The overnight shootings in October and November of 2010 twice targeted the Marine Corps museum and once each targeted the Pentagon and military recruiting stations in Woodbridge and Chantilly.

The shootings raised a high level of concerns, prompting authorities to suspect they were related and conducted by an individual with a grievance against the military in general or the Marines specifically.

But the shootings went unsolved until this summer, when Melaku — a naturalized U.S. citizen from Ethiopia — was spotted by police on Fort Myer and ran off, leaving a backpack behind. He was later caught and arrested at Arlington National Cemetery. The incident prompted a massive security scare in and around the Pentagon.

In the backpack police found spent shell casings; five pounds of ammonium nitrate, a common material in homemade explosives; two cans of spray paint; and a notebook in Arabic that contained references to Osama bin Laden, the Taliban and the “path to jihad.”

Melaku eventually admitted to authorities that he planned to desecrate grave markers in the cemetery by spraying Arabic graffiti on them, and to deliberately leave the ammonium nitrate behind.

Nobody was hurt in any of the incidents, but Melaku has been ordered to make $111,000 in restitution for the damage he caused to the buildings, including the Pentagon.

Though no one was hurt, FBI spokeswoman Jacqueline Maguire called the case serious, and credited investigators for arresting Melaku before he did worse. She noted that a search of Melaku’s home produced evidence that Melaku was looking to build a homemade timer.

The defense lawyer, Gregory English, said he has no doubt that his client is legally sane, but said a proper mental-health diagnosis may help his client become a better person while he serves his sentence.

English, himself a former Marine, said after the hearing that his personal experience suggests it’s possible that some sort of post-traumatic stress or dispute with the Marines may have triggered Melaku’s actions rather than any desire to support al-Qaida or the Taliban.

“The facts of the case and what his parents are saying to me about the young man suggests these actions are totally out of character,” English said.

Dana Boente, the top assistant U.S. attorney for the Eastern District of Virginia, which prosecuted the case, said authorities have no evidence that Melaku suffers from any serious mental-health disorders or that his years in the Marine reserves provided a motive for the crime. He said Melaku never served overseas.

Boente called the crimes “a campaign of calculated and sustained attacks against military installations and memorials in northern Virginia.”

Melaku did not speak during the hearing, except to answer a series of questions from the judge with a soft-spoken, “Yes, sir” and a final “guilty, sir” to formally enter his plea.