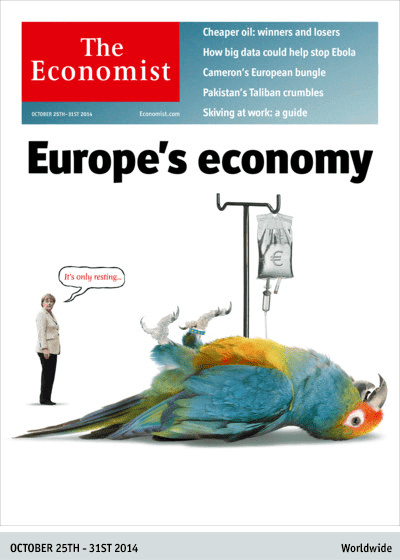 Last week’s issue of The Economist has a cover story (page 25) on the peril of deflation.  As usual they introduce the main story with a teaser (page 15) in the “Leaders” section at the front of the magazine.

That teaser is headlined “The World’s Biggest Economic Problem.”  Wow.  It actually concentrates on the Eurozone.  Sub-headline: “Deflation in the Eurozone is all too close and extremely dangerous.

Here is the third paragraph of that teaser:

Optimists, both inside and outside Europe, often cite the example of Japan. It fell into deflation in the late-1990s, with unpleasant but not apocalyptic consequences for both itself and the world economy. But the euro zone poses far greater risks. Unlike Japan, the euro zone is not an isolated case: from China to America inflation is worryingly low, and slipping. And, unlike Japan, which has a homogenous, stoic society, the euro area cannot hang together through years of economic sclerosis and falling prices. As debt burdens soar from Italy to Greece, investors will take fright, populist politicians will gain ground, and—sooner rather than later—the euro will collapse.  [The Worlds’ Biggest Economic Problem, The Economist, October 25, 2014]

Is the stoicism and continuing stability of deflationary Japan anything to do with the homogeneity?

Perish the thought!  On page 59 the magazine comes to its senses in an article about Britons' views on immigration—a newsy topic after the victory by immigration-restrictionist UKIP (the U.K. Independence Party) in a by-election called by a Tory Member of Parliament, Douglas Carswell, having defected to UKIP.

(Under the British Constitution, a sitting member who changes parties is not obliged to submit himself for re-election, but it’s considered the right thing to do.)

There is another by-election coming up November 20th, caused by another Tory MP, Mark Reckless, having defected to UKIP.  If Reckless wins that one, the Tories will be in deep political doo-doo.  So:

David Cameron is therefore scrambling to toughen his immigration policies. In an earlier bid to curb UKIP’s rise, the prime minister promised to reform Britain’s EU membership and put the result to an in-out referendum during the next parliament. Now he claims he will make restrictions on EU immigrants’ rights a cornerstone of this negotiation. It has also been reported that he is planning a “game-changing” new policy on the issue, possibly to be unveiled before the by-election. This could involve restricting overall numbers of immigrants from elsewhere in the EU.

Fulfilling this pledge would be vexatious, to say the least.  [The Melting Pot, The Economist, October 25th.]

Well, it would certainly vex The Economist.

The overall tone of the article is worried, the magazine’s normal cheery-sneery immigration boosterism dampened with some negativity:

Britain is economically and culturally richer as a result of its immigrants and it is relatively good at integrating them. But Britons are gloomy about their impact (see chart 1).

There are also the usual sleights of hand:

The British Social Attitudes (BSA) survey finds that … proximity to immigrants breeds tolerance of them. Residents of multicultural London have the most liberal views.

Which residents of multicultural London?  Not this one.