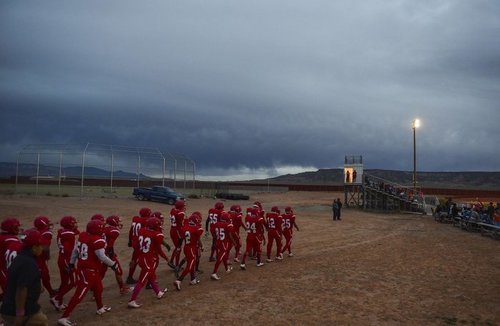 The Washington Post has an article about Red Mesa High School on the Navajo Reservation in Arizona, which proudly uses the Redskins mascot for its high school football team. Most of the students, faculty and community support it, and don’t see a problem with it . Superintendent Tommie Yazzie says of the mascot name that “I don’t find it derogatory. It’s a source of pride.” 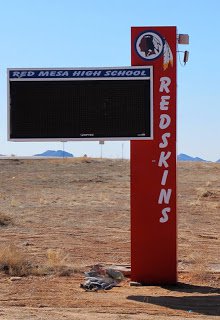 According to the article “… 88 percent of students and 71 percent of faculty members surveyed by the school this month favored keeping the Redskins name and mascot. On another question, 60 percent of students disagreed that Redskins is a slur, 7 percent said the word is offensive and one-third said they weren’t sure.”

There are a few in the school who do object to the Redskins name, so the article quotes a teacher who’s against it.

The Navajo is a the nation’s largest Indian tribe, so it’s not surprising you’d find some dissent. Another Navajo who’s against it is Amanda Blackhorse, not associated with the Red Mesa school.

This month, the Washington Redskins offered the school’s faculty and students both tickets and transportation to a game in Arizona between the NFL Redskins and the Arizona Cardinals. Approximately 150 students and faculty took them up on the offer.

They enjoyed the game, but also encountered the anti-Redskins mascot name protesters, among them Amanda Blackhorse. Some of the Red Mesa students “were taunted by protesters for wearing free Washington Redskins hats and T-shirts.” A Red Mesa football player reports being called a “sellout”.

The Red Mesa school is not the only school in the country using the Redskins name. Far from it:

There were 62 high schools in 22 states using the Redskins moniker last year, according to a project published by the University of Maryland’s Capital News Service. In addition to Red Mesa, two others are majority Native American: Wellpinit High School in Washington state and Kingston High School in Oklahoma.

If you’re interested, read the article, which has more photographs and a video: In Arizona, a Navajo high school emerges as a defender of the Washington Redskins  ByIan Shapira, Washington Post, October 26, 2014.