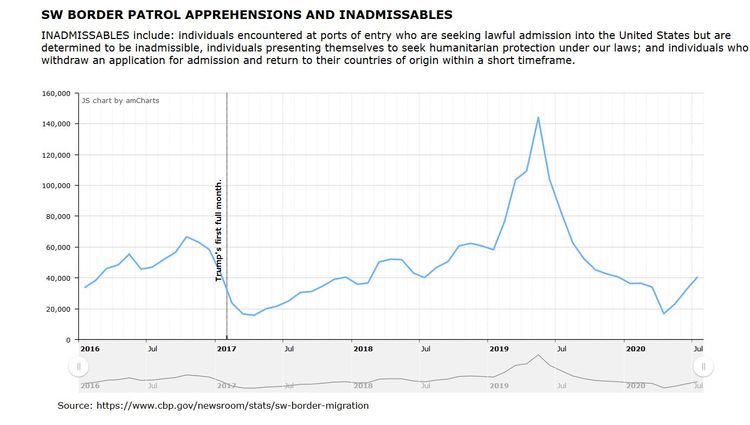 Despite NEWSWEEK Hysteria, Border Apprehensions Still Way Below 2019 Numbers. But They Are Creeping Up

Before the pandemic, single adults who were charged with illegally entering the U.S. faced criminal prosecution and potential jail time. But now, amid coronavirus concerns, only migrants with major criminal histories or who are believed to pose a national security threat are held in detention before deportation.

There is indeed an uptick on the our chart of the Border Apprehensions, last month, below. But in context (this is why we like charts), the influx is still low.

The Monitor, a border paper published in McAllen, TX, says:

As for the enforcement data for July, CBP reported it made contact with 38,347 single adults, families and unaccompanied children around ports of entry and another 2,399 were denied entry into the country at a port of entry after being declared “inadmissible,” the numbers show.

That’s a more than 50% decrease over the FY19 July numbers when CBP reported more than 81,000 encounters, also made up of single adults, families and unaccompanied children.

For the Rio Grande Valley sector, there was a more than 40% drop in unaccompanied minors encountered at the border, while the encounters of families dropped year over year in July — with more than 42,000 families arriving last July to nearly 2,000 families this July, the data shows.

Coronavirus lockdowns are still on in America, although Texas is opening somewhat, but not so much in Mexico. The Border Patrol says that ten of their officers have died in the line of duty from the China Virus, and Mexico's response to the virus has been lame, as Allan Wall has reported.

One problem with both Mexico's response to the virus, and America's problem with contagious Mexican illegals: Mexico's lower-class, illiterate population either does not understand, or refuses to believe, the Germ Theory of disease.