Photo: Thousands illegal alien Irish and their advocates lobbied Washington on March 7. Senator Clinton is shown with her new Legalize The Irish t-shirt. 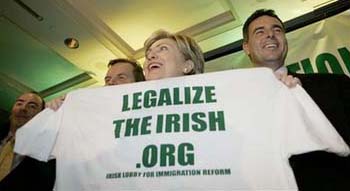 Of all the arrogant ethnic groups who believe that their history (or IQ or geography) makes them too special to obey US immigration law, the Irish deserve unique condemnation. There are around 50,000 illegal Irish squatting in this country — a low number considering there may be 20 - 30 million foreigners unlawfully residing here.

Yet the Irish are enthusiastically engaged in lobbying for an illegal alien amnesty for tens of millions which, if enacted, will exacerbate the destruction of traditional American culture and will end any hope of curtailing the invasion of adversaries from Mexico to Iran. A wholesale amnesty with rubberstamp admittance procedures will certainly admit future terrorists, as has happened in previous amnesties. But the Irish apparently don't regard these threats to America's national security and cultural values as important when measured against the convenience of a relative handful of Irish illegals.

Some illegal Irish say they love America. But they have a funny way of showing it, namely by aligning themselves with the open-borders agenda of our worst enemies. They say they want to join the American community but regard pro-sovereignty patriots as "know-nothings."

Memo to Paddy: the majority of citizens want immigration to be legal, controlled and reduced.

No surprise that Irish ethnic publishing has a cheerful view of shredding American's borders:

The rebirth of the McCain/Kennedy immigration reform bill on Capitol Hill looks this week as if it will coincide with St. Patrick's festivities in Washington next week.

And the Irish Lobby for Immigration Reform is rallying in Washington today in an effort to spur legislators into action on an issue seen as central to the future of the Irish community in the United States. [McCain/Kennedy bill may get St. Patrick's unveiling, The Irish Echo March 7-13, 2007]

For genuine immigration reform to occur, the would-be legal immigrant patiently waiting his turn in his home country must be given a better deal than the noisy millions of illegals demanding amnesty. That means deportation, not reward, for lawbreakers.

All illegal aliens must go to the end of the line in order to enter America. And that line must start in the home country.