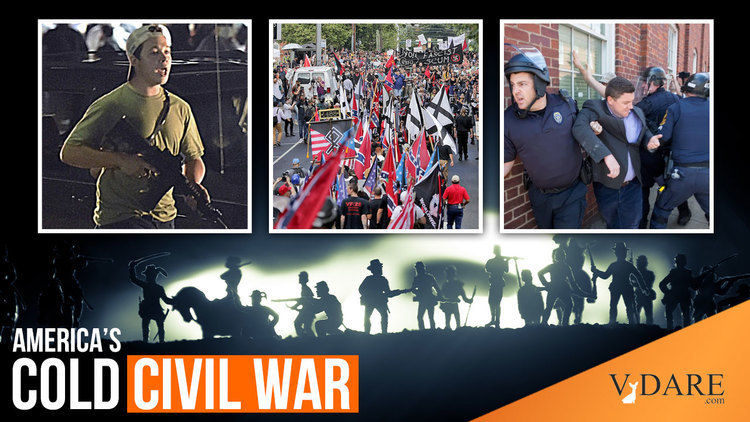 “Demographic Instability”—Why The Cold Civil War May Heat Up

I've just been reading an article that left me thinking I could be wrong, that the Cold Civil War might indeed turn hot.

The article is by British journalist and historian Ed West, who I have referred to often before. Ed nowadays has a Substack account. Midweek he posted an opinion piece titled America's road to January 6, subtitle: "What do the US, Lebanon, Bosnia and Northern Ireland have in common?"

Not to keep you in suspense: what they have in common, says Ed, is demographic instability.

Things can change very quickly. Northern Ireland in the 1960s may have been the most peaceful society in human history; in 1963 and 1964 its homicide rate was 0.07 per 100,000, about a quarter of that of today's Japan or Singapore, the two least violent … countries. By the end of that decade, it was in a state of near-civil war, showing how it only takes a small number of dedicated partisans to turn life into hell for everyone.

So what happened to turn Northern Ireland from almost perfect peace to something like civil war? What happened was, the Protestant Unionists of the place—that is, those who favored continuing the union with Britain—saw their demographic majority slipping away because of higher Catholic birthrates.

Similarly with the Serbs in 1990s Bosnia and the Christians in post-independence Lebanon. Demographic stability is a precious but delicate thing. That used to be common knowledge. Senator Edward Kennedy, promoting the 1965 Immigration bill in the U.S. Senate, said:

Under the proposed bill, the present level of immigration remains substantially the same … the ethnic mix of this country will not be upset.

Soon the U.S. will become the latest state in which the largest group has lost its supermajority, following Lebanon and Northern Ireland. That the country's commentariat greet this change with wild-eyed joy is perhaps testimony to the great optimism that built the country. Or perhaps it is naivety.

Optimism? Naivety? Sorry, Ed, I don't think it's either. I think it's goodwhite strategy for victory in the Cold Civil War—victory over the despised and hated badwhites.

That's what's missing from Ed's piece, which I none the less commend to your attention. What's missing is how much one half of America's white population hates hates hates the other half. It's that hatred that's driving events: a hatred just as strong as the religious, ethnic, or racial hatred that was in play in Northern Ireland, Lebanon, Zanzibar, or the other examples Ed gives. It's as strong as the sectional hatred that split our own country 160 years ago…and may actually be the same thing.