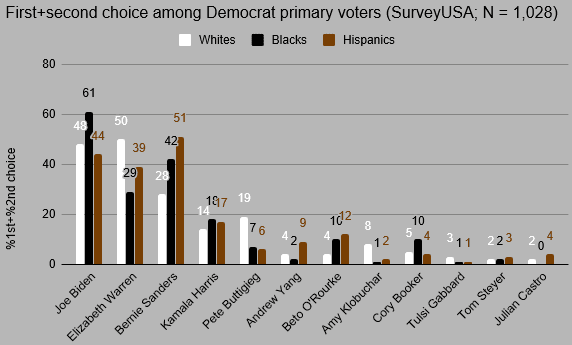 I suspect the perpetual rumors about Biden’s impending implosion will gradually fade into silence. Other than Sanders, his base is the most solid. Note that while the narrative has been that Biden has fallen in the polls, that’s simply incorrect. Biden’s support has remained remarkably steady from the beginning. Warren has closed the gap on him at the expense of Harris and O’Rourke, not Biden.

Biden’s support is twice the size of Sanders’. Additionally, Sanders’ supporters skew very young and thus electorally unreliable. As long as Biden’s supporters don’t scatter after Iowa, New Hampshire, and Nevada, he will win big in South Carolina and possibly come out on top on Super Tuesday.

Pete Buttigieg does very poorly among non-whites, a result I’ve seen repeated in every other poll with data broken out by race. The comparison to Barack Obama in 2008 is a bad one because it only applies to their shared appeal among SWPLs. Homosexuals constitute a few percentage points of the Democrat electorate. Blacks make up one-quarter of it. That’s why Obama won and Buttigieg will not. He has surged recently on good results out of Iowa. For those invested in betting markets, now would be a great time to short him.

The SurveyUSA poll also asked those who voted for Trump in 2016 but plan on voting in the Democrat primaries next year who they plan on supporting. The results are a major reason Biden is Trump’s toughest match up: Though these 2016 Trump voters are not broken out by race, they must be predominantly white. Biden’s coalition is comprised of blacks who appreciate his role as Obama’s loyal lieutenant and of moderate whites who are trying to figure out why people they like keep calling them racists.