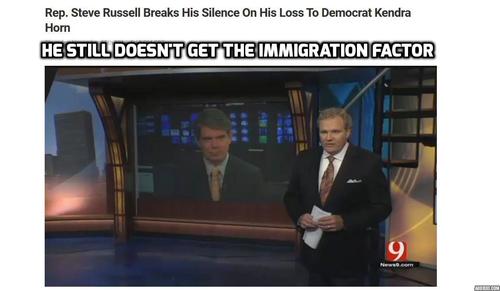 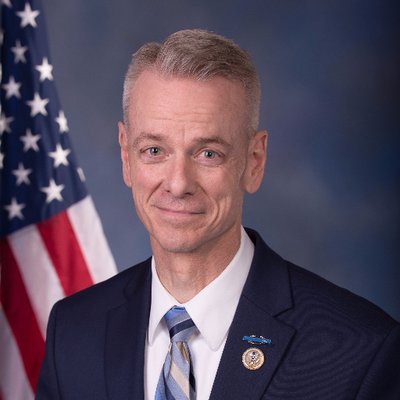 One of the Republican casualties of the recent midterm elections was Steve Russell (right) of Oklahoma’s fifth congressional district, who lost in an upset to Democrat Kendra Horn. This loss was explored here by me in Good Riddance To RINO Steve Russell, OK-5, Done In By Demographics, Arrogance, And Fanatical Immigration Enthusiasm.

On November 12th, Congressman Russell, after nearly a week of silence, posted a nearly 700-word statement on Facebook entitled Breaking the Silence. It’s Russell’s explanation of why he lost. You can read it here.

Here’s how it starts:

After a week to reflect on the race and evaluating the district, I think that there are some very important data to consider. Oklahoma’s 5th District has a growing urban core, specifically, the capitol of Oklahoma City. According to the US Census Bureau, Oklahoma City ranked No. 8 in the nation in Educated Millennial population growth, with a 20% annual increase since 2010.

The Oklahoma City portion of the 5th District contains 90% of the district’s electorate, and the congressman points out that Democrats and Independent voters now outnumber Republicans by 50,000 in the district.

Russell had refused to use negative ads, but claims it wasn’t a factor because

“Oklahoma County [which includes much of the OKC metroplex] went Democratic by a WIDE margin of 22% or 27K votes in the Gubernatorial race and by a narrow .07% rate of only 3300 votes in the 5th District Congressional race. In the 5th District race, I received roughly 2,000 more votes than Stitt, meaning that the core Republican base was not lost and I had about 2% more votes by comparison. The final tally was my 49.3% to Kendra's 50.7%.”

(By the way, Republican gubernatorial candidate Kevin Stitt, a political newcomer, though losing in Oklahoma County, won statewide by a whopping 12 percentage points. So that's not a great comparison. Stitt had the whole state to win in, but Russell had to win in Fifth District only.)

Regarding the demographic issue, the soon-to-be retired congressman Steve Russell writes that

….what is clear is that the urban core of Oklahoma County has shifted rapidly. There used to be no urban core of substantial voters. Now there is. We have been aware of this for the last four years and made great headway in the Hispanic and African-American Communities, redesigning the way we represent with demographical field staff vs. geographical. Our representation and performance among those communities was encouraging, but not enough to counter the rapid urban core growth.

How “encouraging” could it have been, really?

I continued to hold the Republican base and perform well among some Independents and Democrats, but the rapid core annual Millennial population growth of 20% since 2010 made a direct correlation to the electorate.

Millennials are the future of America, and Oklahoma. The 5th District has the lowest unemployment in the state, with 3.2% as compared to 3.7% statewide and 3.9% nationally. They are attracted to Oklahoma or want to remain. My wife and I raised five of them. Time and experience will engage this important population with the values that matter as they marry and raise families. I am optimistic about the potential of our country’s future but saddened by its self-indulgence and lack of respect for one another.

How can Russell be sure that “Time and experience will engage this important population with the values that matter as they marry and raise families”? Steve Sailer has written about the "Marriage Gap", which is indeed a factor in Republican voting, but it doesn't override ethnic voting preferences.

Our numbers were accurate right into election day, our consistent base hovering between 51% and 49% from September to November. What became unknown was how many undecided would break one way or the other. Historically, they break proportionately. This year, they broke almost entirely tribal—aided by a nearly half million dollar Bloomberg negative ad buy in the final four days.

Though Russell blames demographics, he still doesn’t get demographics. If you haven’t already, read about or even watch Russell’s appalling speech on immigration which displays contempt for the historic American nation.

Yesterday, I delivered a speech on the House Floor. In the speech I traced the origins of the immigration situation we find ourselves in today, and I directly challenged widely held views on the dangers of immigration.https://t.co/jci5rugKDq

With an attitude like that how could Russell have really fired up the base? And by all accounts (aside from that of Russell himself), he ran a pathetic campaign.

"I think Steve Russell lost because he ran a poor campaign," stated News 9 pollster Bill Shapard, founder of SoonerPoll.com. Shapard says there are several reasons he believes Russell's campaign was not as effective as it could have been, but perhaps first and foremost because neither his campaign manager nor chief of staff were from the district. "And Steve Russell just did not raise the kind of money that's necessary to run an effective campaign," Shapard said. "He got outworked by Kendra Horn."
Rep. Steve Russell Breaks His Silence On His Loss To Democrat Kendra Horn
Alex Cameron, news9.com, November 15, 2018

That fits in with what I heard through the grapevine.

Shapard says research in Oklahoma shows that young voters do not vote overwhelmingly Democrat. He says they break about 50-50 for Democrats and Republicans. The bottom line, Shapard says, is that the 5th is still a Republican district. "Half of the electorate on election day is a Republican," said Shapard, "and for him to lose as closely as he did, that means that there's a group of Republicans out there that didn't vote for him, he wasn't able to convince them."

To summarize: Russell did face a demographic hurdle, but it was probably not insurmountable had he run a better campaign and stirred up the base.

But if you watch Russell's immigration speech, you can see his disdain for the base.

Today's Republicans who are running in districts like Oklahoma's Fifth need to be able to run good campaigns and turn out the base.

And for the long run, we need to cut off the flow of new immigrants which is likely to someday make districts like Russell’s unwinnable.

What Republicans need are candidates and strategists who, like the Biblical children of the tribe of Issachar, who were “men that had understanding of the times, to know what Israel ought to do” (I Chronicles 12:32).