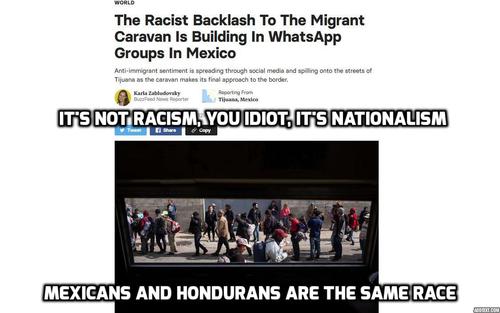 It's Not Racism, It's Nationalism: Buzzfeed Calls Mexicans "Racist" For Hating On Central American Invaders, But They're The SAME RACE

The ructions in Tijuana between Honduran migrants intent on invading the US and Mexicans worried that they won't get in, and will hang around Tijuana has led to this schizophrenic headline in Buzzfeed:

Anti-immigrant sentiment is spreading through social media and spilling onto the streets of Tijuana as the caravan makes its final approach to the border.

This is not racism, of course, it's nationalism. The claim that the US is racist for resisting the Mexican invasion is caused by the fact that Mexicans are largely Indian and mestizo, a word meaning mixed Indian and European.

Therefore, America, as a largely white country is "racist" in trying to stop this invasion. But Hondurans are also Indian and mestizo, and the Mexican protesters in Tijuana are not drawn from Mexico's' white upper classes:

Over the next hour, with the sky already jet-black, the group grew to 11 people, including a woman pushing a stroller; several housewives; and a factory worker earning minimum wage. They lowered their voices when describing the bulk of migrants traveling with the caravan as “ingrates” and “animals,” but raised their voices to criticize the Mexican government for having escorted the caravan as it moved through the country.

They are a small part of the growing backlash to the caravan, taking root in WhatsApp groups and Facebook pages. As the caravan approaches, their incendiary rhetoric increases, with members calling for the group’s deportation — or worse. And with a long wait ahead of the migrants, the odds of a confrontation rise with every angry message sent.

Afterward, several in the group went to Playas, a borough in western Tijuana where another anti-caravan contingent was trying to forcefully evict migrants. The group taunted the Central Americans, chanting “stop coming!” and singing the Mexican anthem. Police had to step in between the two groups.

“I understand Trump. I don’t love him but I know what it’s like to have to defend your country,” Garcia, 52, told BuzzFeed News.

For weeks, the growing presence of troops on the US border had worried members of the migrant caravan, which became a major rallying cry for President Donald Trump's nationalist base and an unprecedented diplomatic and logistical challenge for the Mexican government. Migrants face a new threat: residents of Tijuana — the final stop on their 2,700-mile-long journey — who are organizing protests against the caravan and threatening them, or anyone who supports them, with violence.

Several Facebook and WhatsApp groups advocating for the caravan's deportation have sprung up in the month since the migrants set out from Honduras, underscoring escalating anti-immigrant sentiment in northern Mexico. The violent language used against Central Americans in these groups echoes that used by Trump supporters in the US, referring to the caravan as an "invasion" and issuing a call to arms in defense of borders.

The pushback against the caravan in Tijuana has brought long-standing racism toward Central Americans neighbors to the surface, highlighting the incongruous attitude of Mexicans who demand better treatment in the US while discriminating against — and often victimizing — migrants who move north through the country.

Inside the WhatsApp chat, people have felt free to share their unfiltered views:

"These people are a Cancer that signals the end of Mexico."

"I'm asking the men here to defend their women and children... Since the majority of Central Americans who've arrived are men, violent thefts will start any moment now."

"Plagues are confronted with venom. And [bullets] are the venom here. Hondurans are equal to gonorrhea."

I can only assume that this is called "racism" because of the comparism to what the writer thinks Trump supporters are saying.

Actually, what the Mexicans, who are highly patriotic and nationalist, are saying (in Spanish, of course) is the same as the battle cry in Red Dawn: "Because we live here!"