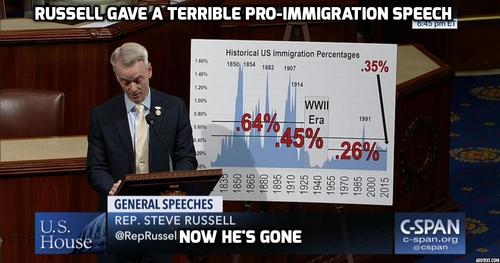 Since 2013, Oklahoma’s congressional delegation has been entirely Republican. But on November 6th, in an upset victory, Democrat Kendra Horn defeated Rep. Steve Russell (OK-5). This district had been represented by Republicans uninterruptedly since 1975, when Rep. John Jarman changed his registration from Democrat to Republican. What happened?

I would attribute it to two factors–changing demographics and the fatal over-confidence of Representative Russell. This guy thought he had it in the bag.

The Fifth District, like many congressional districts, is a bizarre cobbled-together entity. It includes most of Oklahoma County (including much of the Oklahoma City metroplex) along with two rural counties: Pottawatomie County and Seminole County.

Back in 2014, when Russell first won a seat in Congress, The Oklahoman’s Chris Casteel [Tweet him] wrote that long-term, things might not always be in the Republicans’ favor. Casteel quoted GOP Representative Tom Cole of the neighboring Fourth District, who also runs a GOP consulting firm:

U.S. Rep. Tom Cole…said Democratic candidates in Oklahoma City will benefit from the African-American and Hispanic populations, along with affluent, socially liberal voters in some of the neighborhoods in and near downtown. Also, he said, more young, single professionals who lean Democratic are moving into the downtown part of the district… “You can see an emerging opportunity,’’ Cole said, adding that the Democrats in the core area of Oklahoma City are “real Democrats, not the traditional conservative Democrats” of rural Oklahoma…. “You do have basic demographic building blocks” that will favor Democrats in the future, he [Cole] said.

agreed that the district “is a place where Democrats could build and grow. “But I think anything we’re talking about here is a decade or so away.”

It turns out it only took the Republicans four years to lose the seat.

McFerron said Republicans will have to adapt to the times or find themselves unable to compete in the future. Oklahoma is still a conservative state, he said, but “there are long-term demographic changes. “You’re seeing it around the country. Oklahoma is in that transition now.”

But here’s a guy who got it right on the time frame:

Wallace Collins, chairman of the Oklahoma Democratic Party, said that if McAffrey doesn’t win this year, a Democrat will win in two or four years.

We've been writing for years about the changing demographics of the OKC area. Democrat Kendra Horn proved it tonight, as did Drew Edmondson.

We've been writing for years about the changing demographics of the OKC area. Democrat Kendra Horn proved it tonight, as did Drew Edmondson.https://t.co/2STDhhHdB1

There are some interesting responses in the tweet thread:

And, in Representative Russell’s favor, the district is half evangelical Christian:

A recent SoonerPoll of the 5th District—which is most of Oklahoma County, along with Pottawatomie and Seminole counties—found half of respondents considered themselves evangelical Christians. Of those evangelicals, 70 percent supported Russell and just 18 percent supported Horn.

Apparently though, Russell didn’t take his challenger seriously, and thus didn’t even try very hard. From the Oklahoma grapevine, that’s the intel I get. I mean, nobody on Team Russell even appeared at the OU Homecoming Parade! How pathetic is that?

Five Thirty Eight gave Russell an 85.7% chance of winning. But near the end of the campaign period, and under the radar, Russell’s campaign manager figured out how bad it might be. Reportedly by Oct. 26th he went to Russell’s house and warned him. ['You could lose this thing' Russell's campaign manager told him a dozen days before loss, by Justin Wingerter, NewsOK, November 7,  2018] 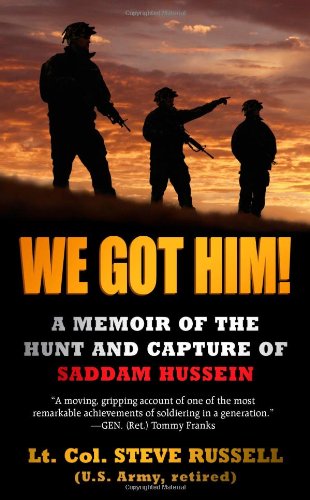 Who is Steve Russell, anyway? A native Oklahoman, from the Oklahoma City metro, he was a career officer in the U.S. Army for 21 years, retiring as a Lieutenant Colonel. He was deployed worldwide and is especially noted for being the commander of the battalion which was key in the capture of Saddam Hussein in December of 2003. Russell even wrote a book about it: We Got Him!

He should be honored for this. But military service, even a successful career like that of Russell’s, does not necessarily qualify one to confront the National Question. In fact, some military folks are totally clueless on the issues, and today’s military (even under Trump) is still more Politically Correct than many people realize. Remember John McCain, who built his whole political career on having been a POW, but also worked hard to make the U.S. a part of Latin America.

Which brings me to Steve Russell on Immigration. Frankly, the guy is an Open Borders fanatic.

What? you may ask. Doesn’t Russell have a B from Numbers USA ? Yes, he does. (Currently, everybody in the Oklahoma delegation has a B or a B-).

But the Numbers USA grade doesn’t capture everything. It measures votes cast by the representative. But that sometimes just depends on what bills the elected official encountered. It doesn’t really measure his intentions, attitudes and tendencies.

We ought to judge Steve Russell’s immigration position by a speech he delivered on the floor of the House of Representatives this past summer.  It was truly loathsome, revealing contempt for ordinary Americans and for the Historic American Nation. 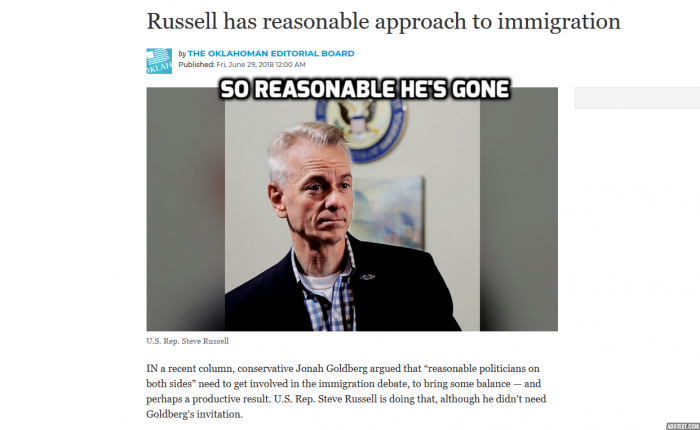 Needless to say, The Oklahoman liked it, editorializing Russell has reasonable approach to immigration [June 29, 2018] That’s a clue it’s not reasonable.

Watch the speech here, if you want to get your blood boiling. Or you can read the (partial, garbled) text here.

Yesterday, I delivered a speech on the House Floor. In the speech I traced the origins of the immigration situation we find ourselves in today, and I directly challenged widely held views on the dangers of immigration.https://t.co/jci5rugKDq

Russell reveals himself as someone who apparently believes that the principal reason for the existence of the American nation is to allow anybody in the world who wants to move here entry.

Of course, Russell says he wants to secure the border, but that’s only so he can let in anybody who wants to come here legally.

As for native-born American citizens who don’t buy into his Open Borders fanaticism, Russell has nothing but disdain. If you don’t agree with Steve Russell, you might be the kind of person he describes as “the critic sitting on the couch eating his Cheese Puffs” who “is pecking out hatred and vitriol.”

But Russell’s views are idiosyncratic, combining typical mass immigration platitudes with a dislike of birthright citizenship which he finds too “feudalistic.” People being born American citizens don’t choose to become American citizens as his beloved immigrants do.

If by that you mean that American leaders have run a bad immigration policy, I would agree with that. But that’s not what Russell means.

Huh? Is Russell saying the Independence/Constitution generation didn’t care about their descendants? Then why does the Constitution talk about “ourselves and our posterity”?

He does admit a problem because the first federal naturalization law stipulated “that the applicant be a free white person”. But he explains that away by calling it “an indication of the times rather than many of the framers’ express wishes.”

Taken to extremes, this position could actually to lead the stripping of American citizenship from native-born citizens who don’t have properly-approved PC beliefs. After all, they were born citizens.

American agriculture does a very effective job of feeding Americans and many foreigners. Is Russell unaware of mechanization? American wheat farming has been mechanized since the 1800s, and through the years more and more sectors have been successfully mechanized. We don’t need to be importing any more agricultural laborers to appease the cheap labor lobby.

Wow, is Russell not aware of the high rates of welfare use among immigrants?

Why such disdain for natural-born Americans? Oh right, they were born citizens, and Russell doesn’t like that.

Is Russell unaware of the many family problems among immigrants and even American Hispanics?

Russell needs to get out more. Well, I guess now that he’s been defeated, he has that opportunity.

“Lady Liberty must continue to raise her arm and keep her torch burning brightly, rather than exchange it for a stiff arm and a middle finger. The words inscribed at her base must not say “Send me only your Physicians, your Scientists and your Nobel Laureates.” If we use our passions, anger and fear to snuff out Liberty’s flame by xenophobic and knee-jerk policies, the enemies of liberty win, and what makes America exceptional will die. Period.

So if we stop the mass immigration invasion which is transforming our nation, then “what makes America exceptional will die. Period.”

Huh? This is what passes for congressional discourse?

So that was Representative Steve Russell. Good riddance.

And look on the bright side. Maybe in 2020 a new GOP candidate will run who actually believes in, you know, appealing to Americans, unlike Steve Russell.

It’s a form of natural selection. The Republican Party is becoming more Trumpian. And just in the nick of time.