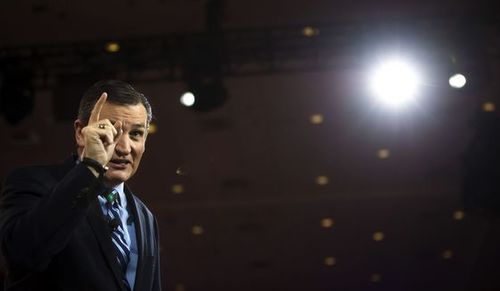 For immigration patriots, Ted Cruz was the highlight of the day.  He certainly sounded like a presidential candidate and continued his approach of attacking his own party leadership in order to appeal to the grassroots.

“Unfortunately, Republican leadership is cutting a deal with Harry Reid and the Democrats to give in on executive amnesty,” Mr. Cruz said, explaining that the reason is “because they are not listening to you.”

The freshman lawmaker said the situation is emblematic of the disconnect between elected leaders in Washington and ordinary Americans.

So far so good as at CPAC it actually counts as political courage to condemn K Street and Wall Street.  After all, who do you think is sponsoring the opulent accommodations?

Cruz also got a good deal of applause at the line "Abolish the IRS—take all 125,000 IRS agents and put them on our Southern border!"

The audience agreed with that too.

But when Cruz started talking about how conservatives need someone who has acted, not just talked about it, it's hard not to think how Ted Cruz joined with the vast majority of Senators who surrendered to President Obama on the DHS funding bill, while only Senators Sessions and Inhofe stood against President Obama's immigration power grab.  [Sessions says 'no' but Homeland Security bill moves ahead. Now, the House gets ready to rumble. by Leada Gore, AL.com, February 25, 2015]

What exactly is Cruz doing?  And how does he plan to separate himself from the pack of Republican presidential candidates who are also railing against an ill-defined "Establishment," praising freedom and Ronald Reagan, and swearing to defend the Constitution?

Cruz might be a "strong conservative."  But according to every other speech I heard today, so is everyone else.  Why should we care?