Senator Jeff Sessions took the floor Thursday and reviewed the last few months of the immigration debate in Washington and the self-inflicted damage that Democrats want to inflict upon the institution of Congress by ignoring the separation of powers.

He warned, “Congress cannot fund an action which dissolves its own powers,” thereby turning itself into a museum piece that merely approves the President’s demands. 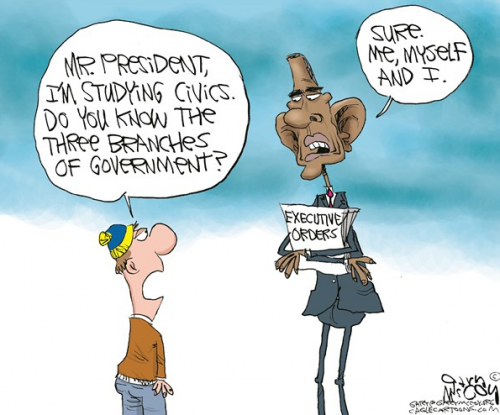 WASHINGTON—U.S. Sen. Jeff Sessions (R-AL), Chairman of the Subcommittee on Immigration and the National Interest, delivered the following prepared remarks on the Senate floor today regarding the responsibility Congress has to fund the Department of Homeland Security while withholding funds for President Obama’s unilateral executive amnesty:

“On July 14th of last year, I wrote a letter to lawmakers on both sides of the aisle warning that the President was planning to issue an executive amnesty for 5 million illegal immigrants. Congress was at the time considering supplemental funding measures for the Department of Homeland Security. I wrote:

“Congress must not acquiesce to spending more taxpayer dollars until the President unequivocally rescinds his threat of more illegal executive action… If Congress simply passes a supplemental spending bill without these preconditions, it is not a question of if the President will suspend more immigration laws, but only how many he will suspend.”

Executive amnesty became a major issue in the election. Many who had supported the President’s immigration policies were sent home, while those returning on both sides of the aisle said during their campaigns that they opposed those policies.

On November 20th, after a historic midterm defeat, President Obama defied the will of Congress and the American people, and issued his executive amnesty for 5 million illegal immigrants. This amnesty included work permits, Social Security and Medicare payments, and cash tax credits—taking jobs and benefits directly from struggling Americans.

Each of these measures had been considered and explicitly rejected by Congress. Congress acted decisively to oppose the President’s legislation and to maintain the current laws of the United States as codified in the Immigration and Nationality Act. President Obama’s executive action nullified the immigration laws we do have and replaced them with the very measures Congress and the American people have time and again rejected.

Not even King George III had the power to legislate without Parliament. President Obama himself described such an action as being something only an Emperor could do. Twenty-two times the President declared such an action would be illegal.

President Obama ignored his own warnings, and issued an edict that defies the Congress, the Constitution, and centuries of legal heritage that gave birth to our Republic.

The Founders, in their wisdom, gave the Congress the tools it would need to stop a President if he were to overreach. Chief among those is the power of purse. I read now from Federalist 58, authored by the great Father of the Constitution, James Madison:

“The House of Representatives cannot only refuse, but they alone can propose, the supplies requisite for the support of government. They, in a word, hold the purse that powerful instrument by which we behold, in the history of the British Constitution, an infant and humble representation of the people gradually enlarging the sphere of its activity and importance, and finally reducing, as far as it seems to have wished, all the overgrown prerogatives of the other branches of the government. This power over the purse may, in fact, be regarded as the most complete and effectual weapon with which any constitution can arm the immediate representatives of the people, for obtaining a redress of every grievance, and for carrying into effect every just and salutary measure.”

It is a complete power of the people’s elected representatives. Congress has no obligation to fund those actions which it believes are unwise. And it has an absolute duty not to fund actions which are unlawful and unconstitutional. Congress cannot fund an action which dissolves its own powers. Congress cannot become a museum piece, a marble building that tourists visit to hear about great debates from long ago. It cannot exist merely to approve that which the President demands.

Is this to be the new normal? Congress must provide the President with the funds he wants, for any project he dreams up, no matter how illegal and unconstitutional? Is the power of the purse now a historical concept, never to be used again when it is needed most? There is no more basic application of congressional power than to establish where funds may and may not be spent; indeed, that is the very definition of an appropriations bill. And there could never be a more important time to exercise such a power than when our Republican heritage itself is at stake.

We cannot let this Congress go down in the history books as the Congress that established a new precedent that we will fund any imperial decree that violates established American laws.

And this is not a minor constitutional violation. It is an explosive violation. It threatens our very sovereignty. Essential to any sovereign nation is the enforcement of its borders, the application of uniform rules for exit and entry, and the delivery of consequences for any who violate those rules. But the President has suspended those borders, erased those rules, and replaced consequences with rewards.

I cannot vote for any legislation that funds this illegal amnesty. There must be a line in the sand, a moment where people say: this is where it stops. That is why I will oppose this legislation if the amnesty restrictions are removed, and urge my colleagues to do the same.

The American people are right and just and good and decent people. They have asked of Congress, begged Congress, and pleaded with Congress for years for our laws to be enforced. Congress has responded over the years and passed immigration laws to protect their jobs and wages. They have elected lawmaker after lawmaker who has pledged to do the same. But each time, their will is nullified. Each time, their laws are ignored. Each time, the special interests, the open-borders billionaires, the global elites, get their way.

We will take that case to the American people and see whether it is indeed possible for six Senate Democrats to defy the hopes, the dreams, and the sacred rights of every law-abiding American citizen.”