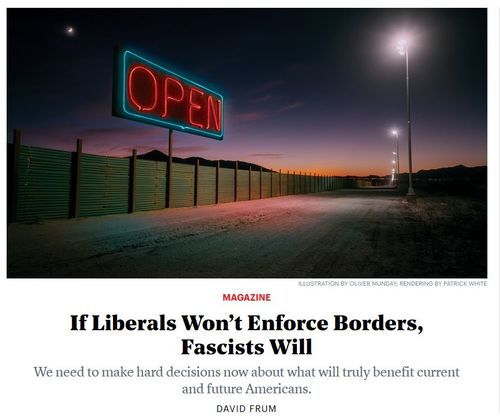 In the Atlantic, David Frum says some sensible things about immigration, mixed in with the Trump Derangement that's implicit in his title: If Liberals Won’t Enforce Borders, Fascists Will | We need to make hard decisions now about what will truly benefit current and future Americans, by David Frum, April 2019. The idea that immigration should benefit Americans rather than immigrants is a "trope", if you will, associated with Steve Sailer—and of course, most Americans.

In the fall of 2018, an unprecedentedly large caravan of would-be border crossers—peaking at 7,000 people—headed toward the United States from Central America. Trump demagogically seized on the caravan as a voting issue before the November midterm elections—and goaded many of his critics to equally inflammatory responses. “This whole caravan in the last week of the election is a giant lie. This is Trump’s Reichstag fire. It is a lie,” said a guest on MSNBC’s All In With Chris Hayes. But however manipulatively oversold, the caravan existed; it was not a lie. Thousands of people were indeed approaching the U.S. border, many hoping to force their way across by weight of numbers.

Demagogues don’t rise by talking about irrelevant issues. Demagogues rise by talking about issues that matter to people, and that more conventional leaders appear unwilling or unable to address: unemployment in the 1930s, crime in the 1960s, mass immigration now. Voters get to decide what the country’s problems are. Political elites have to devise solutions to those problems. If difficult issues go unaddressed by responsible leaders, they will be exploited by irresponsible ones.

David Frum's arguments don't attack white immigrants like himself. They dehumanize brown and black immigrants from Central America and West Africa. But this isn't new. Immigration has always been about race, about who does and doesn't belong.

People on the right aren't happy, either, because Frum is allowed to say bad things about immigration in the Atlantic that we get deplatformed for. Here is David Reaboi being bitter.

The thing is, Frum, an "immigrant himself" from Canada, has known about immigration since the 90's, when he read and reviewed VDARE.com Editor Peter Brimelow's book Alien Nation in the Ottawa Citizen. That  review was so positive that Brimelow's publishers used part of it as a blurb in the paperback edition.

"Don't be misled by the verbal pyrotechnics: Brimelow presents his case with a prosecutor's thoroughness. ... No reformer can avoid grappling with the formidable work of Peter Brimelow."

Here's a sample of the things I've written pointing out Frum's immigration common sense, in which he is dissenting not only from the liberal, but from the neoconservative consensus: