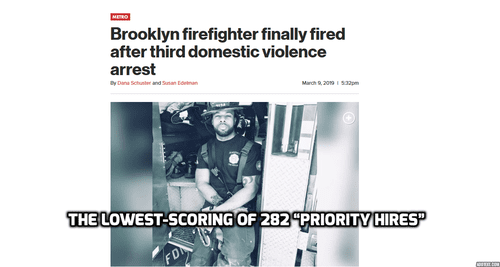 Brooklyn firefighter Clyde Phillips was axed Wednesday after his third arrest stemming from charges of domestic violence, The Post has learned. …

Last January, Phillips was arrested for assault and harassment after allegedly punching an ex-girlfriend, Teszra Cody, in the face at a midtown Duane Reade. The attack was reportedly captured on surveillance video. Afterwards, the restraining order was issued.

… Two months before the Duane Reade incident, Phillips was arrested for choking another ex, Farah Simon, “pushing her head against a wall and shoving her to the ground,” according to a criminal complaint filed in Union County, NJ Superior Court. Simon ended up dropping the charges. …

Phillips is a former subway engineer who fraudulently took a family leave from the MTA to attend the Fire Academy in 2014, officials said.

He was the lowest-scoring of 282 “priority hires” ordered by a Brooklyn federal judge who ruled that minority candidates were victims of race bias.