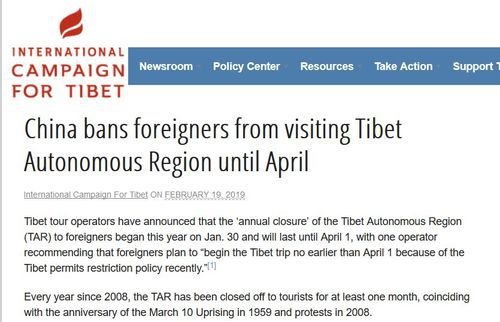 In the latest Radio Derb, I noted that the unfortunate Tibetans have had no control at all over their own affairs for a long time: to be precise, for sixty years this week.

Marking the anniversary, this Sunday was Tibetan National Uprising Day. Tibetans in exile held appropriate events to commemorate the loss of their country.

You can't get more distinctive than Tibetans. They have their own language, their own religion, their own cuisine, their own calendar, their own folkways, a well-defined territory they've lived in for centuries, and they put butter in their tea. In a just world they'd be governing themselves.

This is not a just world. Tibet is under Chinese occupation. The ChiComs are very well aware of this week's anniversary. They've closed the whole country to foreign visitors until April. They've done this every year since 2008.

There is nothing we can do in a practical way to restore Tibetan independence, but we can at least bear witness to the barbarism, cruelty, and injustice of the Chinese occupation. I've tried to do that, as occasion permits, for over thirty years now, and I shall go on trying.