David Brooks Needs To Get Out More—And Catch Up On VDARE.com, Starting With ON TRUMP

THERE’S SOMETHING GOING ON HERE, BUT YOU DON’T KNOW WHAT IT IS, DO YOU, MR. BROOKS? “Trump voters are a coalition of the dispossessed. They have suffered lost jobs, lost wages, lost dreams. The American system is not working for them, so naturally they are looking for something else. Moreover, many in the media, especially me, did not understand how they would express their alienation. We expected Trump to fizzle because we were not socially intermingled with his supporters and did not listen carefully enough. For me, it’s a lesson that I have to change the way I do my job if I’m going to report accurately on this country.”

Well, David, you should get out more. You might also try reading InstaPundit regularly. But mostly, you owe a bigger apology than this.

The Tea Party movement — which you also failed to understand, and thus mostly despised — was a bourgeois, well-mannered effort (remember how Tea Party protests left the Mall cleaner than before they arrived?) to fix America. It was treated with contempt, smeared as racist, and blocked by a bipartisan coalition of business-as-usual elites. So now you have Trump, who’s not so well-mannered, and his followers, who are not so well-mannered, and you don’t like it.[Emphasis in italics added by Instapundit, in bold added by me.]

(The bit at the start about "There's something going on here, but you don't know what it is" is a reference to Bob Dylan's Ballad of A Thin Man.)

What Brooks is talking about is the "Bubble" Charles Murray spoke about, in which elites have never  held a real job, and don't know anyone who does, or anyone who owns a gun, or anyone who's even related to someone who's in the Army.

I was going to suggest that maybe what Brooks really needed to do—without telling anyone—is start reading VDARE.com, but then I remembered that there's evidence that he actually does, from time to time, especially the Steve Sailer bits. 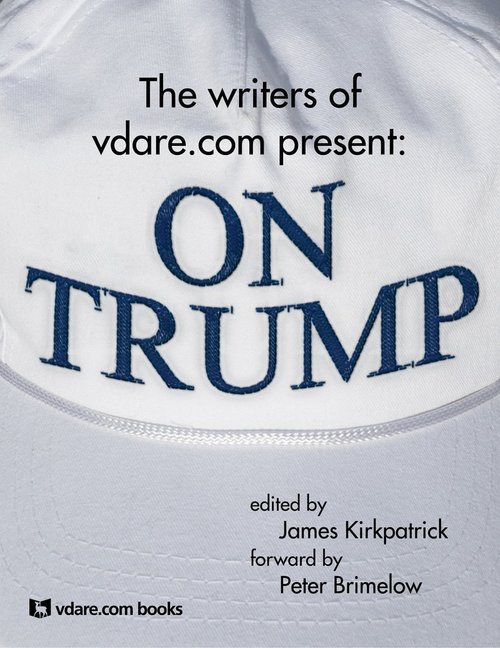 In the late 2000s, it was pretty obvious that David Brooks of the New York Times was reading my blog and then sometimes writing columns as if I defined the conventional wisdom and he was the brave heretic. It was certainly more interesting and intellectually challenging for him than reading New York Times editorials.

Steve has  also written that Brooks "tries to walk the fine line between being public-spirited and having a career." This is not just Steve's imagination—in 2004, Brooks had his hand slapped for actually quoting something Steve had written.[ NY Times' Brooks cited defender of eugenicists in touting new political constituency December 7, 2004]

Mostly, of course, people who use our ideas just act like they made them up themselves. However, looking through our coverage of Trump might cure Brooks of some of his ignorance.  In the interest of catching up, I suggest he get the free ebook (On Trump) available here.