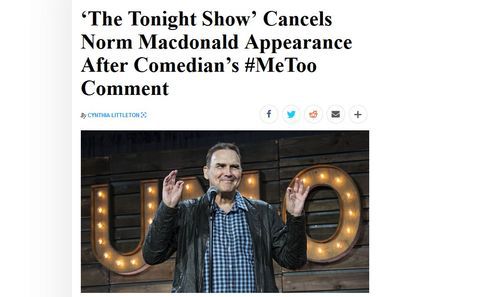 The Latest Comedy Crisis: People Who Don't Get Norm Macdonald

Ashley Nicole Black is a professional comedy writer on Samantha Bee’s TV show Full Frontal. So if she says that when “Norm Macdonald also said he didn’t know that racism existed until Sasha Baron Cohen’s show premiered this year” is not funny, it’s Not Funny.

Would Samantha Bee be wasting her money on a comedy writer who can’t understand what’s funny about old-timer Norm Macdonald saying he didn’t know that racism existed until Sasha Baron Cohen’s show premiered this year?

If you don’t believe me, just ask Ashley Nicole Black. She’ll tell you:

@spennyshiff and @OnTheCaseMan Please explain to me the joke that I missed here. I’m geniunely asking. I do not see how this was meant to be a joke.

I think the difference with Rock or Chapelle is even when I disagree with the content, from the structure I can tell it was a joke. And often it’s still funny, even though it’s “wrong”. MacDonalds comments today didn’t have set ups and punchlines. They weren’t structured as jokes

Norm Macdonald’s appearance on “The Tonight Show Starring Jimmy Fallon” was hastily canceled Tuesday after the comedian stirred controversy with remarks about the #MeToo movement and the treatment of Louis C.K., Chris Hardwick and Roseanne in recent scandals.

“Out of sensitivity to our audience and in light of Norm Macdonald’s comments in the press today, ‘The Tonight Show’ has decided to cancel his appearance on Tuesday’s telecast,” NBC said in a statement. “Tonight Show’s” decision to drop Macdonald came even after he apologized for his comments later in the day.

In an interview with Hollywood Reporter, Macdonald said he was “happy the #MeToo movement has slowed down a little bit.” He further opined: “It used to be, ‘One hundred women can’t be lying.’ And then it became, ‘One woman can’t lie.’ And that became, ‘I believe all women.’ And then you’re like, ‘What?’ Like, that Chris Hardwick guy I really thought got the blunt end of the stick there.”

He also stated that he felt Roseanne Barr was treated harshly in the storm that ensued after she likened Obama adviser Valerie Jarrett to an ape in an early morning tweet in May. Barr was fired and her “Roseanne” sitcom revival was canceled within hours (it was ultimately revived as “The Conners” without Barr’s involvement).

The existence of unapproved opinions is no laughing matter.

But Norm’s friends and fans took to Twitter to offer him support:

Norm,
I told you! You really DO have people who love you and care for you!
You have to hear THEM, as well as your critics! https://t.co/slicpeYuvp

Kitchener Leslie must be at least 115 years old by now, so can’t we grant an old railroad cop’s one last request and not cancel Norm again?