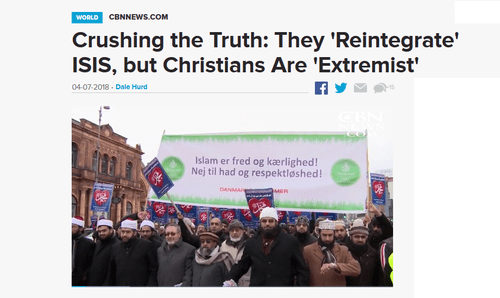 This report from Dale Hurd is a couple months old, but is still timely and important. The only point that needs updating is the fact that Tommy Robinson didn’t only have his Twitter account locked down: he is himself now in jail because of sketchy accusations designed to shut him up completely.

The upshot is that governments, particularly of Sweden, are censoring their own people who want to tell the truth about immigrant crime. Sweden does not publish statistics about who is committing the crimes because the truth would be upsetting.

Below, Swedish blogger Johan Westerholm fears his government may shut down his blog or even imprison him for writing honestly about the changes to his country since diversity happened. 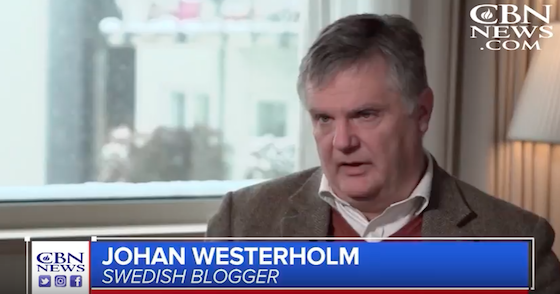 As CBN reporter Hurd observed, “If you can’t fix the problem, punish the critics.”

Does the Swedish government really think it can use censorship to hide how much the nation has been harmed by muslim immigration? From all accounts, the problem has become too extreme to ignore.

Crushing the Truth: They ‘Reintegrate’ ISIS, but Christians Are ‘Extremist’, By Dale Hurd, CBN News, April 7, 2018

STOCKHOLM — Conservatives are feeling the heavy hand of censorship in the United States and across Western Europe. Their social media accounts are being banned, blocked and canceled on Twitter, YouTube, and Facebook, often over criticism of Islam or immigration.

A 65-year-old Swedish woman faced charges for saying immigration from the third world will lead to low IQs. She was cleared only because authorities couldn’t prove it was her.

Public Enemy No. 1: ‘Hate Speech’
Two weeks ago three conservative activists were refused entry into Britain because British Border Police said, “likely to incite tensions between local communities in the United Kingdom.” One was interrogated as a terrorist and was asked if she were a “Christian extremist.”

This is the same Border Force that allowed more than 400 former ISIS fighters to return to Britain for “reintegration.”

Authorities in Britain now seem more interested in fighting hate speech on the internet than fighting crime and are warning social media users that their comments are being monitored.

Sweden ‘Moving Toward Authoritarianism’
But Sweden is taking the most aggressive approach against free speech with a proposed new law that would make it a serious offense to publish material that would embarrass the Swedish government internationally. Another law would make it harder to show that immigrants are responsible for most violent crime.

Crime is now so bad in some parts of Sweden there has been talk of calling out the army to help the police.

But the new law would ban public use of government data that could be used to identify the ethnic origins of criminals.

“We are moving toward authoritarianism,” warns Swedish blogger Johan Westerholm.

Westerholm runs a website critical of uncontrolled immigration in Sweden. He’s not sure how much longer before his website is shut down.

If You Can’t Fix Immigration Problems, Blame the Critics… and Call Them Names
“We call the critics [of Sweden’s immigration policy] foul names and say the problem is racism, says Iranian-born Swedish lawmaker Hanif Bali, who takes heavy criticism for his opposition to Sweden’s immigration policy, even though he himself is an immigrant.” ”I’m not only called ‘racist;’ I’m also called ‘Uncle Tom;’ I’m also called ‘house nigger.’ I’ve been compared with Doctor Mengele. And it’s not from average people. This is from well-established opinion journalists and politicians.”

The Swedish media helped pioneer what is now called ‘doxing’ – exposing the identities and addresses of people who express politically incorrect opinions online. CBN News showed a video from 4 years ago showing a Swedish journalist going to the home of a man who posted in a right-wing forum and then publishing the video nationally. The man reportedly lost his job.

One Swedish organization, Näthatsgranskaren, whose name means ‘internet hate surveyor’ hunts down politically incorrect speech and reports people to the police. It has received funding from the Swedish government.

But Sweden’s worsening crackdown on free speech will do nothing to fix any of the real problems that have created the speech in the first place. It’s as if the government thinks if it can just stop people from talking negatively about the problems, the problems will go away.

“There is not a single study about how immigration has causally affect crime in Sweden. That’s absurd, I would argue, says Swedish economist Tino Sanandagi. “The government even in the last 12 years has stopped publishing the statistics so nobody knows really what percentage of total crime last year was committed by immigrants. The numbers are collected, but not used.”