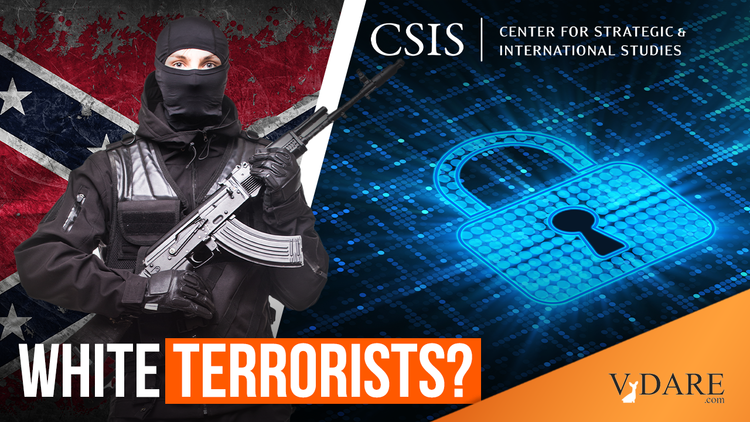 On June 17, 2020, the Center for Strategic and International Studies (CSIS) [Tweet them] a prestigious think tank, published a report called “The Escalating Terrorism Problem in the United States.” Here are its crucial claims, based, as we will see, on data it won’t release:

The media are thrilled:

The report does make a concession on the number of victims:

In analyzing fatalities from terrorist attacks, religious terrorism has killed the largest number of individuals—3,086 people—primarily due to the attacks on September 11, 2001, which caused 2,977 deaths. The magnitude of this death toll fundamentally shaped U.S. counterterrorism policy over the past two decades. In comparison, right-wing terrorist attacks caused 335 deaths, left-wing attacks caused 22 deaths, and ethnonationalist terrorists caused 5 deaths.

The report therefore tries to downplay the danger of religious terrorism by explaining that the 9/11 attacks inflate the death toll, but it makes no similar allowance for deaths caused by the Right. The study includes the Oklahoma City bombing of 1995, which killed 168 people. Without that attack, the number of right-wing killings falls by more than half, to 167.

The third group of right-wing terrorists are “incels,” or the “involuntarily celibate.” They are men who hate women because they have been rejected. They sometimes kill women, but why is that “right-wing”? And why are they terrorists? They are more like school shooters, who have no political platform or organization.

The line between “religious” and “right wing” is blurred. Attacks motivated by opposition to abortion are “right-wing,” not “religious,” and “hatred based on sexuality or gender identity” is “right wing.” By this definition, Omar Mateen, who pledged allegiance to ISIS and murdered 49 people at a gay nightclub, could be a “right-winger.”

But there is no way to know whether CSIS called Mateen “right wing” or “religious.” The study is based on “an original data set of 893 terrorist plots and attacks in the United States between January 1994 and May 2020,” but the authors won’t release the data. I emailed and called several people at CSIS and asked for it. Caleb Diamond, “Media Relations Manager and Editorial Associate,” finally got back to me and said CSIS refuses to share it.

CSIS promoted this study knowing that it would make waves. It also made sure you can’t check its work. Are we the only people who care?