Here's a disquieting thought: a sob-story case will be heard by the Supreme Court to decide whether alleged gang violence in the home country can be added to the list of excuses to claim asylum.

Three recent high school graduates from South St. Paul who fled gang violence in their homeland of El Salvador are in the middle of a deportation battle that has reached the U.S. Supreme Court.

The case is expected to set a national precedent on whether resisting forced recruitment into violent gangs in other countries is grounds for asylum here.

Pablo, Rene and Silvia Mira left El Salvador in 2004, illegally crossing the border to live with their mother in Minnesota. Arrested by immigration agents shortly after entering the United States, they argued they were fleeing recruitment by the notorious MS-13 gang, whose criminal activities include drugs, human trafficking and murder.

Although their case was still making its way through judicial appeals this summer, the Miras were unexpectedly seized at their family apartment July 6. Deportation was slated for this week — until their appeal was referred to the full U.S. Supreme Court by Justice John Paul Stevens. [Immigration law: El Salvadoran family fights deportation, Minneapolis Star Tribune, July 30, 2009]

Of course, there's no proof at all that the forlorn fable recounted by the family is true. Former Assistant Commissioner of the INS Jan Ting estimated that "95 percent" of refugee and asylum applications are fraudulent.

Some officials have cautioned against widening the asylum window, warning that it could lead to unwanted immigrants, including possibly gang members fleeing violent lives.

Or gang members looking for more profitable territory. Criminals from around the world come to America because there is so much here to steal.

Below, the illegal alien Mira family hopes their gangster sob story will get them gilt-edged green cards. 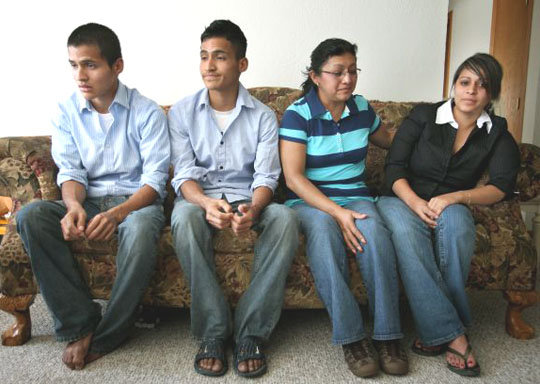