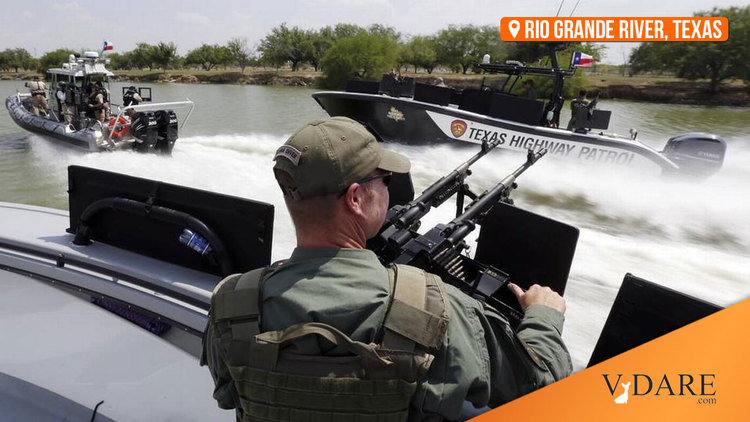 Governor Greg Abbott is following Federale’s advice. I noted some years ago during the Border Collapse under Kirstjen Nielsen, the repeat of the Children’s Jihad that was part of the Obama Regime Administrative Amnesty, during 2019. One of my suggestions was to physically prevent illegal aliens from entering the United States by crossing the Rio Grande through the use of riverine military forces, primarily Texas Department of Public Safety (DPS) boat units, the U.S. Navy, the U.S. Coast Guard, and the U.S. Army.

Governor Abbott has taken the next step and will be using Texas State Militia, DPS, game wardens, and National Guard forces to physically stop illegal aliens from entering the United States.

Governor Greg Abbott today announced the first in a series of aggressive actions by the State of Texas to secure the border in the wake of President Biden’s decision to end Title 42 expulsions. The Governor made the announcement at a press conference in Weslaco, where he was joined by Texas Department of Public Safety (DPS) Director Steve McCraw, Adjutant General of Texas Maj. Gen. Thomas Suelzer, and Texas Division of Emergency Management (TDEM) Chief Nim Kidd.

And it will get dicey, there will be boats and boots in the river physically confronting and blocking illegal aliens.

Governor Abbott announced additional strategies being deployed immediately to secure the border. DPS and the Texas Military Department (TMD) are preparing additional boat blockades, deploying razor-wire at low-water crossings and high-traffic areas, and installing container blockades to stem the flow of illegal crossings. Additionally, TMD will begin the first phase of mass-migration rehearsals this week, and all DPS troopers and specially trained Texas National Guard soldiers will be given riot gear in case of violence among caravans and migrants.

Now push-back or the physical prevention of the entry of illegal aliens by physical force is highly unusual, but neither illegal nor prevented by law. Nor is it prevented by any regulation or policy within the Department of Homeland Security (DHS); however, unofficially, it is discouraged. It was used at one point at the height of the 2018 and 2019 border surge by illegal aliens, but DHS backed off that tactic when President Trump threated to close the border to Mexican commerce, and the flood subsided.

However, as part of the Biden Regime assault on law enforcement and to encourage illegal immigration, the Regime will probably try to criminally prosecute any Texas officer who uses force against an illegal alien. Though I doubt if they will get any convictions given that even Hispanic Democrats on the border are sick of the invasion.

We shall see how it goes. But kudos to Governor Abbott and other Texas leaders for at least trying to stem the tide.