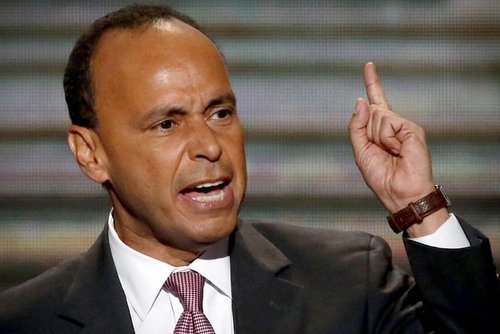 In last week's podcast I referred to Congressman Luis Gutiérrez as a, quote, "Latino supremacist."

Several listeners emailed in to congratulate me for hitting that particular nail on the head. One of them added the following, though, which I think is a point worth discussing. I quote from my listener, who prefers to remain anonymous.

Before I do so, in fact, this gives me the opportunity to repeat one of Radio Derb's ground rules. If you email me in with something I want to quote, I will always ask for your permission before doing so, and will further ask whether or not you prefer to remain anonymous.

OK, over to my listener:

The phrase "Latino supremacist" needs unpacking. The usual rule in Latin American nations, certainly in Mexico, is that the commanding heights of politics, culture, and the economy are held by whites, while the bronze race, La Raza, feeds on scraps from their tables.

So Latino supremacy in practice means white-Latino supremacy. Somebody should ask Rep. Gutiérrez why mestizos like himself, much less brown or black Americans, should wish for this.

It's a good point. For a column I wrote last year I put together collage pictures of the last dozen Presidents of Mexico, and the same for Brazil. As I said in my column, they, quote: "don't look anything like California lettuce-pickers or Carnavaleras," end quote. They sure don't. What they look like is, boards of directors of two Westchester County exclusive golf clubs.

So why is congresscritter Gutiérrez pushing for a society which presumably will end up, as all Latino societies do, stratified by race, with whites running the show and browns like himself doing the yard work?

Well, for one thing there is the great truth that if love is blind, hate is even blinder. Congresscreep Gutiérrez is driven by hatred of gringos and his hatred blinds him to obvious facts like the one stated by my listener.

An alternative explanation would be cynicism. The white elites in Latino countries put a few browns and mestizos in secondary positions to give the illusion of sharing power. They flatter and pamper these stooges, who repay them with loyalty and obedience, like trusties in a jail. Perhaps congressweasel Gutiérrez hopes for one of these trusty positions in the Latino U.S.A. he's trying to bring about.

My personal preference would be to live in a society not stratified by race, certainly not in the rigid Latin-American style. A famous survey in Brazil in 1976 asked people to self-identify by skin color: it got 134 different categories, from acastanhada, which means "cashew-colored," via meio-amarela, that's "mid-yellow," to vermelha, which means "reddish."

I don't want to live in a country that racially self-conscious, not even one like Brazil, with us whites living in gated communities up on the mountains and the other 133 races fighting over table scraps in the stinking favelas down below. That's the society congressreptile Gutiérrez is wishing on us, though.

Speaking as a white person, I guess I can live with it if I have to; but what's in it for him?