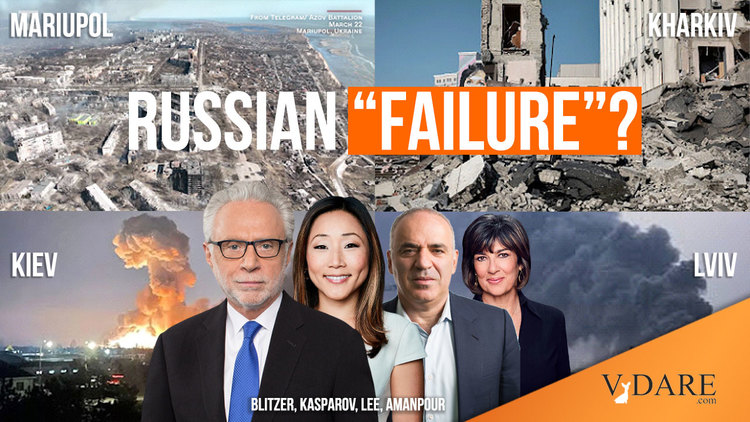 CNN Talking Heads (NONE Of Them American-Born): You Must Believe U.S. Intel On Russian Military “Failure”!

I was just watching CNN, with Wolf Blitzer (a West German–born Jew, which I just learned!) hosting, and a panel of M.J. Lee, their South Korean (born) White House reporter, Russian Jewish “human rights” activist (washed-up, world chess champ) Garry Kasparov, and anti-Semitic, chief world reporter Christiane Amanpour, who was born in London to a Moslem, Iranian father and a Catholic mother  [Ukraine: Russia Continuing “Full-Scale Armed Aggression,”  March 30, 2022]. (Thus, out of four talking heads, not one was a Christian White man, or born in America.)

One talking head (Blitzer, I believe) said that U.S. intelligence claims that Vladimir Putin is being misled by his military leaders into thinking Russian forces are doing better than they really are. Blitzer and his guest talking heads explained that Putin has been dictator for 22 years, and people are afraid to tell him what he doesn’t want to hear.

And yet, the very same segment, with Amanpour doing most of the talking on the ground in Ukraine, showed that Russian forces have devastated the country. 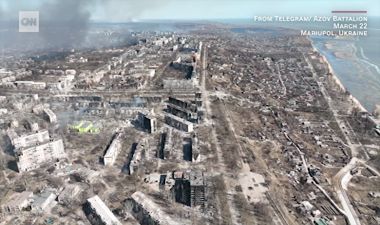 She was at a factory that had served as a food depot that had been destroyed, and showed a delivery truck that had taken a direct hit from a bomb. Amanpour assured us that the driver had gotten away just in time.

The segment also showed a huge, bombed-out apartment building, and aerial photos of a new Ukrainian city laid to waste (Irbin), and mention of the destruction the Russians have inflicted on Mariupol. Then there’s Kiev, Kharkiv, Volonavkha, etc. If that’s a failure of the Russian military, what would count as success for it?

The larger issue is that CNN expects us to believe Deep State U.S. intelligence agencies, the same ones which lied to us for years, in asserting that President Trump had only won the 2016 election through “Russian collusion.”

Meanwhile, someone emphasized, as CNN has been doing for weeks, that the Russians live off of “lies.”

Blitzer asked, rhetorically, “Do the Russians think they can create their own reality?” Kasparov responded, on cue, “Absolutely.”

So tells us the U.S. dictator’s regime press agency.

Meanwhile, back in domestic Bizarro World, we have a criminal regime in power, thanks to The Big Steal, which tells us that law-abiding, tax-paying American patriots, including white parents who merely criticize genocidal, black supremacism (currently called “critical race theory”) at school board meetings, or who peacefully protested The Big Steal are “domestic terrorists” and “White supremacists,” who must be imprisoned for many years (and many of whom languish in jail without being bonded out, 14 months later, tortured by racist, black guards), and in which the chairman of the U.S. Joint Chiefs of Staff, Gen. Mark Milley Vanilli, is more concerned with studying and crushing fictional, domestic “white supremacists” than with winning foreign wars.

Who is it that thinks they can create their own reality, Wolf?

(Postscript: Contradicting my long-time practice, with one exception, I used “U.S.” above, instead of “American.” That is because, except when I spoke of patriots, I was not writing of America.)