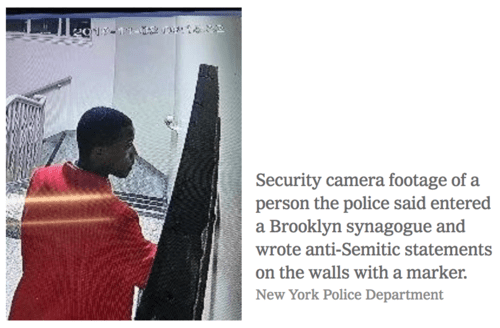 As I’ve pointed out many times over the years, the way New York Times articles often work is that the first paragraphs reassure NYT subscribers: Here is even more evidence that your world-view of who are the Good Guys and who are the Bad Guys is 100% right.

Those who keep reading, though, may find subversive facts toward the end. The honesty glass is half empty or half full, depending upon how far into an article you read. For example, from today’s New York Times: 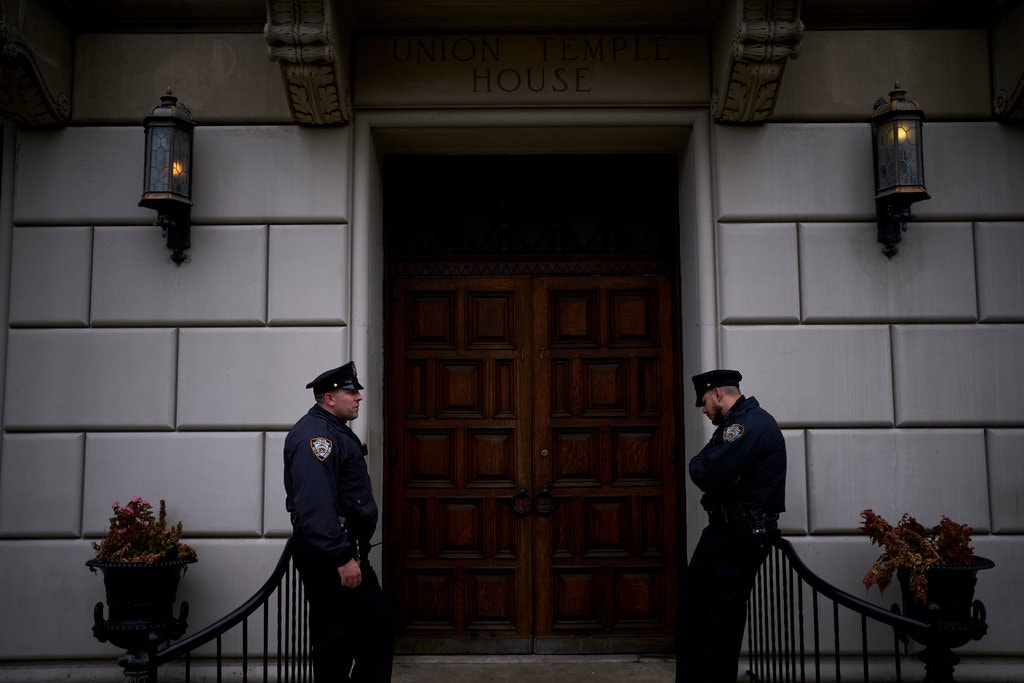 The Union Temple of Brooklyn on Friday. An event featuring the comedian Ilana Glazer, the co-star of “Broad City,” was canceled on Thursday after hateful graffiti was discovered. Credit John Taggart for The New York Times

A get-out-the-vote event at a Brooklyn synagogue featuring the comedian Ilana Glazer was canceled on Thursday night after anti-Semitic graffiti, including the words “Die Jew Rats,” was discovered scrawled on the temple’s walls, the police and officials at the synagogue said.

The vandalism, which is being investigated as a hate crime by the Police Department, jarred residents in a deeply progressive area of Brooklyn. It occurred on the heels of the mass shooting at a Pittsburgh synagogue last week and a recent spate of similar incidents in Brooklyn and Manhattan.

On Friday afternoon, the police released a photograph of a suspect, taken by a security camera inside the temple.

No verbal description of the suspect is offered. So just use your imagination! He’s probably a MAGA-hatted cross between Haven Monahan and Slingblade, depending upon your feelings/fetishes about Trump voters.

The event, at the Union Temple of Brooklyn on Eastern Parkway in Prospect Heights, was to include a question-and-answer session. Ms. Glazer, the co-star of “Broad City,” was scheduled to interview a journalist, Amy Goodman, and two candidates for the New York State Senate, Jim Gaughran and Andrew Gounardes.

shelbyyq My friends surprised me for my birthday tonight with tickets to see @ilanusglazer speak at @generatorcollective – a series of talks with activists and politicians about the importance of voting and humanizing politics. Unfortunately, after waiting for over an hour to enter the auditorium, we were notified that some emboldened bigot had covered the walls of the Jewish temple that was housing the event with anti-Semitic symbols and slurs. Organizers felt unsafe and uncomfortable carrying on with the event, and rightfully shut it down. THIS IS WHY WE NEED TO ELECT GOOD PEOPLE INTO OFFICE. This is why we gathered tonight. This is why we protest and demand real, direct action against acts of hate and violence. Thank you to the ever-badass @ilanusglazer and Amy Goodman of @democracynow for putting these kinds of events together and staying strong in the face of incredible intolerance. We will not be stopped or silenced. Your hate has no place in this country. ✊

But shortly after 8 p.m., Ms. Glazer announced the event was canceled because the graffiti, written with a black marker, had been discovered in various locations inside the temple, which was built in 1929.

Rabbi Mark Sameth of Union Temple said he learned from the temple’s president that the vandalism was found soon after it happened. “My first response was that it was sickening,” Rabbi Sameth said. “It would have been sickening under any circumstances, but all the more so following the horrific tragic events in Pittsburgh.”

The Police Department’s Hate Crime Task Force is investigating the incident, the police said. Other words written on the walls inside the synagogue included: “We are here,” “Hitler,” “Jew Better Be Ready” and “End it now,” the police said.

But eventually, for those who are still reading after about 500 words, the NYT finally lets slip the security cam photo of the evil white male neo-Nazi Alt-Right Trump voter who scrawled anti-Semitic graffiti on a progressive synagogue:

The words “black” or “African American” don’t appear in the article.

In contrast, when racial identity contributes to Narrative Maintenance, the NYT is extremely upfront about it:

They ain't making Neo-Nazis like they used to ... https://t.co/ZmJTTn3VXs