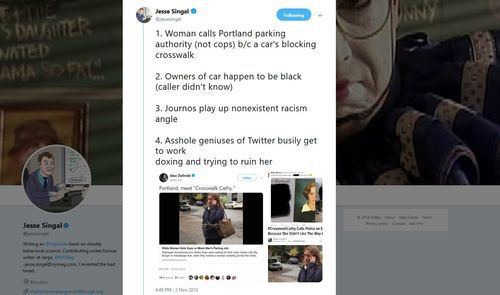 The Latest Front In The War On Beckys: Crosswalk Cathy

The perceptive human sciences reporter Jesse Singal of New York magazine is rightfully annoyed by the latest front in the War on Beckys: “Crosswalk Cathy:”

2. Owners of car happen to be black (caller didn't know)

4. Asshole geniuses of Twitter busily get to work
doxing and trying to ruin her pic.twitter.com/qAHGvV7ARJ

One suggestion I have for journalists in general is to stop having so much respect for Black Twitter. Credulity over the reliability of Black Twitter has gotten the MainStream Media into countless factual fiascos such as Innocent Baby Trayvon vs. the White Man and Ferguson’s Gentle Giant.

Stop assuming that if random black people around the country on Twitter are outraged over, say, how Michael Brown was gunned down in cold blood while raising his hands to surrender or how racist Crosswalk Cathy racistly tried to have a racist parking regulation racistly enforced, that has to be exactly what happened because they wouldn’t put it on Black Twitter if it weren’t the truth, the whole truth, and nothing but the truth.

Update: The Three-Fifth Amendment to the Constitution states: “Congress shall make no law requiring black people to do anything they aren’t in the mood to do, like not parking in a crosswalk, because history. And racism. And white privilege.”

Legal scholars state that if you ask whether the Three-Fifth Amendment overrides the Zeroth Amendment (“Anybody from anywhere has the right to immigrate to America anytime, no questions asked”), or vice-versa, then you are a racist troublemaker and they have their eye on you.