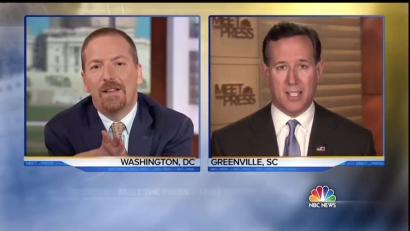 The video clip below (or here, if embedding doesn't work) is via the conservative media critics at NewsBusters:

During an interview with Republican presidential candidate Rick Santorum, Meet the Press moderator Chuck Todd appeared visibly shocked when his guest argued that Democrats support amnesty because “they can win more elections.”

In response to Santorum, Todd acted indignant and interjected to ask “you think that the Democrats are for immigration, for more immigration, simply for politics, for votes, they’re looking for votes?”

But what Santorum said in response to all this is even more amazing (emphases added throughout).  He refers to the late  Barbara Jordan who headed the Jordan Commission in the 90's.

Congresswoman Jordan was indeed not a rock-ribbed conservative. She was a black leftwing Democrat, who nevertheless said that the principle behind immigration policy in the national interest is that “People who should get in, get in; people who should not enter are kept out; and people who are deportable should be required to leave.“

Obviously, you're known more as an economic populist, really, than any other Republican in this field. And it's interesting to me, while a majority of the country favors a candidate who supports, say, raising taxes on the wealthy or raising the minimum wage, the Republican Party itself isn't there. Do you worry that you're out of step with the Republican primary voters, even if you're in step with general election voters?

I just worry about doing what's best for America. And the America workers who have been really left behind by both political parties, but particularly by this administration. The wealth gap, as Bernie Sanders says, has risen. It's not like we've been passing a whole bunch of conservative policies here in the last six years.

I mean the bottom line is that these liberal policies end up helping those who have resources. But if you're an investor, if you're someone who's an owner, you've done very, very well under President Obama. If you're someone who's a worker, you've seen wages flat line. And so what does this president want to do, and even Bernie Sanders, they want to bring in more people to this country who are primarily unskilled and have them compete so we can keep those wages down. And for one reason the Democrats want to do that, because they believe it's politically good for them, and they can win more elections. That is not in the interest of the American public. And so—

You think that the Democrats are for more immigration simply for politics, for votes, they're looking for votes?

Well, if you go back and look at the history of the Democratic Party, Chuck, they have not been the party of pro-immigration. I mean you can go back to the latest immigration report. Barbara Jordan, not a rock ribbed conservative, said that our immigration policy should be in the national interest, and we should have controls on immigration because of that. We have to look at the interest of American workers.

And for decades, Democrats looked at the interest of the American workers until it became important for them to be on this other side because of the politics of it. No one is standing for American workers, unfortunately, in either party. Big Business wants cheap labor costs. Hillary Clinton wants more votes. I want to make sure that the American worker has an opportunity to see their wages rise and their incomes increase.

This is all strong patriotic stuff that you won't be hearing from Jeb Bush.  Chuck Todd was acting like he'd never heard it before.  For previous Santorum coverage see